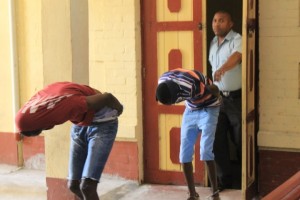 Dellon Thom and Trefon Parris leaving for the lock-up at the Georgetown Magistrates’ Court.

Charged with the murder of Gladtson “Tuffy” Taylor on April 1, 2016 at Sussex and Adelaide Streets Charlestown are 30-year old Dellon Thom and 21-year old Trefon Parris.

Taylor was gunned down  while seated in a chair, in what police investigators believed was a revenge killing for the shooting death of Guyana Defence Force (GDF) Coast Guardsman, Keon Payne on March 30, 2016.

They were not required to plea to the indictable offence and they were remanded to prison until April 29, 2016 by Chief Magistrate, Ann Mc Lennan. The duo was not represented by a lawyer. 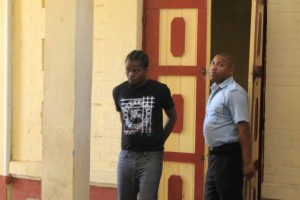 Minutes later, Dellon Small was arraigned for the murder of the GDF Coast Guardsman on Lyng and Sussex Streets, Charlestown.

He was remanded to prison until April 29, 2016 after the Chief Magistrate was told by Defence Lawyer, Glenn Hanoman that police investigators did not take statements from three persons who could state that Small was at another location continuously during the time that Payne was gunned down.

After hearing Hanoman’s arguments, the Chief Magistrate ordered Police Prosecutor Sarabo to make arrangements to take statements from the persons including three of them who stood in court who could attest to Small having been “some distance away.” ‘Four persons can place the accused somewhere else but they have not been facilitated to give statements,” the lawyer told the court.

The well-respected criminal lawyer also told the court that an eyewitness has claimed that a van load of police had passed by and one of them shot dead Payne. “I hope that the police can do a proper investigation and get advice from the DPP (Director of Public Prosecutions),” he said. “Whenever police investigate police, strange things happen,” Hanoman told the court.

Outside the courtroom, a tearful female associate of Small- Lashana Benn- appealed for a proper probe. “I need a proper investigation. They can’t even come and take statements. He was nowhere at the time,” she said.  She said small, who lives at Roxanne Burnham Gardens, was at the time on Curtis Street, Albouystown when Payne was gunned down.