‘Pilgrim is not fit to run a prison’ – released inmate testifies 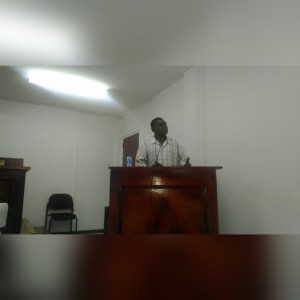 Narine gave the opinion while testifying at the Commission of Inquiry into the Camp Street Prison riot on Thursday, April 7.

Under cross examination by joint services Attorney Selwyn Pieters, the inmate who was recently granted his freedom express his concern for the leadership capabilities possessed by Pilgrim.

He said “Pilgrim is not fit to run a prison.”

Explaining his position on the opinion he said, “if you are an officer in charge of a jail and you are going to tell the general population and tell them we are going to lock you in a cell and let you kill each other I am going to do the necessary paper work then you can’t be fit.”

Narine who explained the death of the 17 inmates as a “massacre” was questioned as to his qualifications to arrive at such a position but could provide none to the Commission.

“If a man like Mr Hazel were on that jail it would not have happen – these officers look into prisoners problem…these men I would say are capable to running a prison,” he said mentioning the names of a few other officers. Shortly after the Camp Street Riot, Pilgrim had publicly apologized for what transpired making it clear that there were no excuses for what happened.

Pilgrim said that he was entrusted with the care of the Prison facility and he does not need a COI for him to apologize for the three day unrest.

“I don’t have to wait on an inquiry or an investigation to simply say sorry because I am responsible for a prison location…Like a soldier, you have to be responsible for everyone under your charge,” he said.