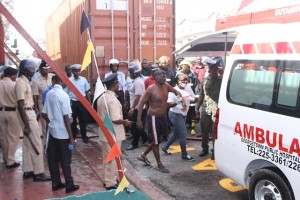 Jacobs, on his second day of testimony at the Commission of Inquiry into the Camp Street Prison Riot, was at odds to explain when the ban was implemented but he said that it was that way for as long as he knew.

The murder accused has been in jail for close to five years.

Under cross examination by Guyana Bar Association (GBA) President Christoper Ram, the inmate stated that prisoners are only allowed to read publications from the Guyana Times and the state-owned Guyana Chronicle.

He said that on one occasion, after leaving the Magistrates Court and heading back his Dormitory, he was told to discard a copy of the Kaieteur News he had acquired while he was at court.

Reacting to the inmates statement, Ram said that it was essentially violation of the fundamental human rights of an individual.

“It makes one wonder and we will certainly be asking the prison authorities – what is the basis for this policy…depriving prisoners of their constitutional rights – the longer this continues the longer you realize how serious the situation is,” Ram stated in an interview.

He explained that the Bar Association would be watching to see what the Commissioners do with this bit of information.

The inmate was also questioned about the conditions of the prison and told the Commission that “them rats big more than…lemme see…them is stand up on their feet like people.”