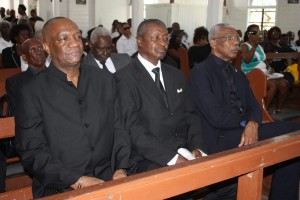 President David Granger, along with several other senior members of Government and other political zealots paid their final respects to the late William Haslyn Parris, the former Deputy Prime Minister of Guyana, at a  funeral service held at the St. Anthony’s of Padua Parish in Buxton.

Parris was born in Buxton Village, East Coast Demerara, on March 2, 1941 and died at the Balwant Singh Hospital, Georgetown on March 28, 2016, a few weeks after his 75th birthday.

In a eulogy delivered at the service by one of his daughters, the former Deputy PM was hailed as one of Guyana’s most true patriots.

“Everyone agrees that my father was a patriot but I think that Guyana was his religion. He was a devout Guyanese,” said Sarah Parris. 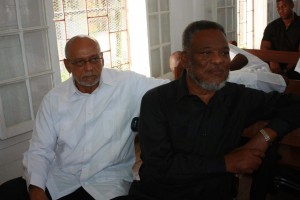 Parris was educated at Queen’s College, Georgetown, where he won the Guiana Scholarship in 1959. He attended the University of the West Indies, Mona, Jamaica, earning a BSc (Mathematics) in 1962 and the London School of Economics where he then earned a BSc (Economics) in 1966 and an MSc (Economics) in 1967.

Up to the time of his passing, he had served as a member of the government-appointed Steering Committee on Constitutional Reform that has been established to chart the way forward to further amend the 1980 Constitution.

He had previously served as Coordinator of an Oversight Committee on Constitutional Reform Commission from 1999 to 2000 and was also a former member of the Guyana Elections Commission (GECOM).

2016-04-04
Writer
Previous: BK Tiwari says he was appointed to advise Harmon, not government
Next: CoI Chairman, Prison Attorney square off over release of video evidence