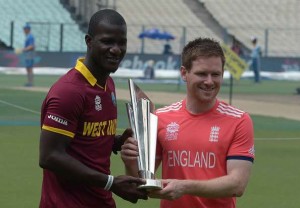 The President said that these victories provide us with an opportunity to celebrate and be proud of our collective achievement as a region.

The teams’ thrilling victories have undoubtedly thrown the people of Guyana and the Caribbean into a state of euphoria and have once again served to unite our people as regional cricket successes invariably do.

The Government and people of Guyana are proud of and send heartfelt congratulations to West Indies Captains, Darren Sammy and Stafanie Taylor, who led their teams to these historic victories.  The President also specially mentions 18-year-old Windies Women’s opener Hayley Matthews, who hit a stunning 66 off 45 balls with three sixes and man of the match Marlon Samuels, who guided the men’s team with his 85 off 66 balls. Of course special mention must be made of Carlos Braithwaite, who brought the victory home for the men’s team with four consecutive sixes in the final over of the match.

Sport, and cricket in particular, occupies pride of place in our Caribbean states as observed by the Caribbean’s pre-eminent contemporary cricket scholar, Sir Hilary Beckles, in his foreword to the Report on Governance of West Indies Cricket.

“Cricket is the principal arena for the expression of all art forms, a unique pride of place it does not command in any other civilisation,” wrote Sir Hilary.

The Government and the people of Guyana salute and congratulate each player and the entire support staff who have rallied together to contribute to these fulfilling and stunning victories, which have brought joy to the people of the Caribbean and which they will celebrate with fervour.

The West Indies’ triumphs in these global tournaments seat the region’s men’s and women’s Twenty20 teams at the pinnacle of this format of the game on the world stage. The West Indies Men’s team is the first to have won the ICC World T20 on two occasions and the West Indies Women’s team has won the trophy for the first time.

Further, that these two enigmatic victories follow that of the West Indies Under 19 Team a few months ago indisputably positions West Indies cricket as a whole as a world force in the game. Guyana looks forward to continued successes and the government and the cricket-loving people of Guyana look forward to welcoming the teams to our shores for the upcoming Tri Series.