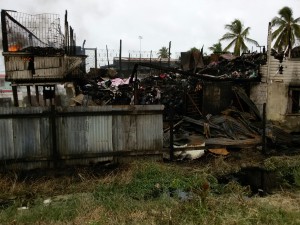 The destroyed bond where the fire began erupting again at about 11:30 AM Sunday.

Fire Chief, Marlon Gentle told Demerara Waves Online News that investigators suspect that the fire was “deliberately set.”  He said no one was injured at the bond which is located between the LBI Public Road and Railway Embankment.

A probe has so far revealed that there was no security guard there and persons visited the building once monthly or every two months.

A nearby resident said he heard a loud pop shortly after returning from work and moments later saw the building engulfed in flames.

The Fire Chief ruled out the possibility of intense heat from the sun during daylight hours causing cloth and kitchen utensils to burn.

He said from all accounts, the building was ventilated.

Three fire fighting appliances arrived from Campbellville, Alberttown and Georgetown after receiving a report at about 11:55 PM Saturday.