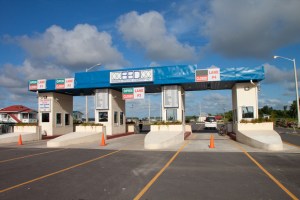 Consequent to an arrangement between the Government of Guyana and the Berbice Bridge Company Incorporated (BBCI), the company is budgeted for a $150M subvention in the 2016 Budget.

The 2016 fiscal plan for Guyana presented by the Finance Minister boosts a whooping total of $230B – the largest budget in Guyana’s history.

According to the Estimates of the Public Sector, while BBCI was budgeted to receive a $36M subvention in 2015, the company only received $31M.

The $31M would have covered expenses relative to the reduction of Bridge tolls that are being subsidized by the government.

The Bridge Subsidy officially started on January 1, 2016 and covers a toll reduction for passenger cars and minibuses, from $2,200 to $1,900 and for all other types of vehicles by 10 percent, excluding vessels.

Lowering the tolls saw the fulfillment of an incremental campaign promise made by the 6-Party coalition government.

When BBCI had initially refused to lower the tolls, the government had to resort to the use of speedboats (river taxis) as a means of getting people across the river in a more cost effective manner.