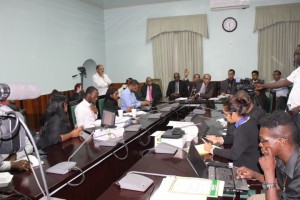 Jagdeo at a press conference shortly after Jordan concluded his budget speech declared that some Guyanese are still confused and might still be trying to figure out what really happened in the National Assembly.

He said that despite the predictions by the Finance Minister relative to stimulating growth and restoring confidence, it will not happen in the budget whose theme is “Stimulating Growth,Restoring Confidence: The Good Life Beckons.”

“It will never achieve the outcomes that are laid out here,” Jagdeo stated adding “the measures are not going to restore confidence nor are they going to stimulate growth so there is a huge disconnect.”

He said that for several of Guyana’s productive sectors there is nothing in the Budget.

“Nothing for construction nothing for manufacturing…very little for tourism…we have not seen any measure to stimulate production,” said Jagdeo.

He indicated that the pension was increased by a paltry sum and pensioners are now poorer under the APNU+AFC administration than they were under the People’s Progressive Party.

“We have seen no increases for wages in salaries and an increase in the threshold that will not make a difference for people’s lives so this budget has absolutely nothing for poor people…the good life can’t start with this budget. People would have retrogression in their lives,” the Opposition Leader indicated.

He said that the private sector in this country will lose further confidence in the economy and it will bring greater hardships for Guyanese.

In his address to the House, the Minister indicated that public servants would have to wait until relevant discussions with workers’ unions are complete before any decision is made on salary increases.

“Mr. Speaker, an announcement on salary increases for public servants, for 2016, has to await the conclusion of discussions with the relevant unions,” said Jordan.

He said that despite the obvious disappointment that the public servants will display, it should be clear that the government has their best interest in mind. Jordan is asking for the workers to give collective bargaining a chance to work.

Previous: Economy to grow by 4.4%; inflation at 2%
Next: GGMC Commissioner fired