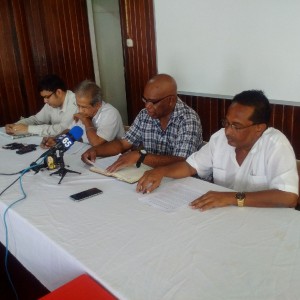 The Guyana Agricultural and General Workers Union (GAWU) and the National Association of Agricultural and Commercial Industrial Employees (NAACIE) want a Social and Economic Impact study to be conducted on the importance of the Wales Sugar Estate.

Chand said he wants such a study to focus on whether the workers should plant fruits and vegetables, and whether the factory workers would require training.

“First we would like to hear from them rather than say what we would like. We want to see that this whole process is halted so we could have discussions and consultations so we wouldn’t want to advise what should be the venture. A study ought to be done to ensure that the people are gainfully occupied and they would be able to earn as much as they are earning now,” he said.

Guysuco’s Chief Executive Officer, Errol Hanoman was tight-lipped about the venture but signaled that it could be agro-based and would seek to utilize the existing skills of the Wales Estate workers. “You expect whatever else we do will provide employment for the people in that area, in that region. They are essentially general agriculture workers  so that I expect that whatever we do, I see no reason why they couldn’t find opportunities for employment,”  he told Demerara Waves Online News.

Hanoman declined to say specifically what the new venture would be all about. “We are going with an open mind at the moment and there are a couple of ideas that we are looking at but I don’t want to rule out anything,” he added. He said management was working feverishly to ensure that something significantly happens by the time the estate closes.