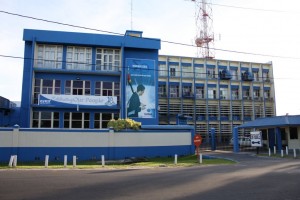 The headquarters of the Guyana Telephone and Telegraph.

The Guyana Telephone and Telegraph (GTT) appeared set to go ahead with offering a voluntary retirement package of a 100 percent payout of pension contributions to employees who are 55 years old and have served the company for at least 10 years.

In a statement issued by the telecoms provider, no mention was made of giving into the demand by the Guyana Postal and Telecommunications Workers Union (GPTWU) for the letters to be withdrawn and the bargaining agent first consulted.

Instead, GTT pointed to the importance of the package in ensuring that the company’s pension scheme survives. “The Executive Management also met with them where it was emphasized that the acceptance or rejection of the offer is one of individual choice and the primary reason for this exercise was to ensure that the pension scheme remains viable to the benefit of all employees,” the landline, cellular and data provider said in a statement.

Commending all long-serving employees, GTT stressed that the offer of “voluntary retirement” was purely optional and beneficial to both the company and the employees. “The company sees the voluntary offer made to employees as a win for both long-serving employees and consumers. Employees win because they are being given a unique opportunity to take advantage of a one time, 100% pension payout. We will continue to deploy resources so that we can expand services and make system upgrades,” said GTT.

The company explained that employees, who are 55 years old and worked for at least 10 years, were each formally given the option of voluntary retirement

GTT said it was excited about our future plans in which it intends to make significant investments in some key areas, which will be announced soon. “We remain optimistic that 2016 is the year in which we are granted spectrum for 4G mobile data and the telecommunications sector is liberalized in order to ensure that all players are on a level playfield,” the company added.

The GPTWU Thursday threatened to call out its workers on industrial action if GTT refused to withdraw a “early retirement” letter that it dispatched to some 150 employees.

Union President Harold Shepard accused the phone company of dispatching the letters to the employees advising them of the early retirement plan without first consulting the union.

He noted that in accordance with the Trade Union Recognition Act and Guyana’s Constitution, the company was obligated to engage the union before engaging the workers in such a “high-handed” manner.

The workers have until January 29, 2-016 to cccept the deal that entails one week’s pay for every year of service not exceeding ten years and or 100% lump sum payout of current pension benefits.