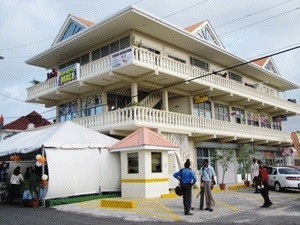 The Mon Repos branch of the Bank of Baroda was Friday afternoon robbed by three masked men armed with a handgun, Head of the Criminal Investigations Department, Senior Superintendent Wendell Blanhum said.

The five-minute incident occurred at about 12:50 PM.

He said the RK Security Guard, who was on duty at the time, was relieved of her .32 service firearm. Police said one of the armed robbers snatched the gun from the guard, jumped the counter and took away  an undisclosed sum of cash from two tellers before escaping in a waiting car.

Blanhum said police have established road blocks and are looking for an off-white Premio bearing a false number plate- PNN 8984. He said the car was last seen heading in a westerly direction. “The police have quickly responded to the report received and strategic road blocks have been established and anti-crime patrols alerted. Crime Intelligence Units have also been activated,” police later said in a statement.

The Mon Repos branch of the India-headquartered bank is located on the lower flat of a mini shopping mall just behind that village’s market.