Trinidadian convicted for terrorism, along with former Guyanese politician, dies in US jail 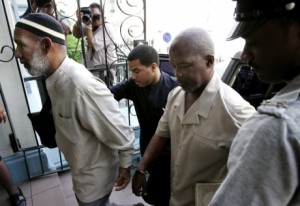 AP Photo: Kareem Ibrahim, (left), and Guyanan Abdul Kadir arrive to the Magistrate Court for an extradition hearing in Port-of-Spain, Trinidad in this 2007 photo.

A Trinidadian man, who was convicted along with former Guyanese parliamentarian Abdul Kadir, for plotting to blow up the John F. Kennedy International Airport, has died in a United States Federal Prison.

The Trinidad Newsday newspaper reported that Kareen Ibrahim- Trinidad and Tobago’s first official terrorist- died Tuesday morning in a United States prison where he was serving a life sentence for conspiring to commit a terrorist attack at John F Kennedy International Airport in Queens, New York, by exploding fuel tanks and the fuel pipeline under the airport in 2007.

The trial established that Ibrahim provided religious instruction and operational support to a group plotting a terrorist attack at JFK Airport. Ibrahim, Kadir and TT national Abdel Nur were arrested in Trinidad in 2007. They were extradited to the US and after a trial in 2010, Russel Defreitas and Kadir were convicted and sentenced to life in prison.

Kadir is a former parliamentarian for the People’s National Congress Reform (PNCR) and a former Mayor of Linden.

Nur pleaded guilty before trial and was sentenced to 15 years in prison.

Scoon said Ibrahim, whose body “never took to incarceration” died from heart complications at about 10.10 am yesterday at United States Medical Centre for Federal Prisoners, Missouri.

“It is unfortunate, that an innocent man was convicted of a crime that he had absolutely no guilt and had to spend the last winters of his life in a maximum security prison in the United States,” Scoon said.

Scoon said arrangements were being made by Ibrahim’s family to have the body returned to this country. On December 4, 2015, Justice Nadia Kangaloo deemed Ibrahim also known as “Amir Kareem” and “Winston Kingston” a terrorist after the State invoked provisions of the Anti-Terrorism Act 2005. The judge also ordered all of Ibrahim’s assets, whether local or foreign, be frozen. A federal jury convicted Ibrahim of multiple terrorist offences in May, 2011, after a four-week trial.

Previous: Wales Estate being closed because it will be too expensive to fix- GuySuco’s boss
Next: GWI urges conservation as Water conservancy dries up