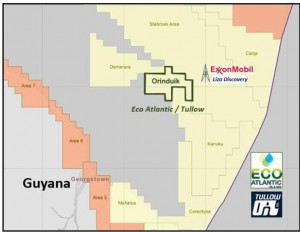 Map of the Orinduik block. Courtesy of Eco Atlantic.

Subsidiaries Eco Guyana and Tullow Guyana will hold 40% and 60% working interest in the block, respectivley, with Tullow Guyana as operator.

Tullow will reimburse Eco Atlantic for part of its costs in relation to the application of the Block license and will partially carry Eco Guyana for the future 3D program.

In total, the license term of the exploration period is for 10 years. The decision to drill and to complete the first exploration well must occur within the first renewal period in years five and six.

The Orinduik block is located in the Suriname Guyana basin in shallow waters and is located close to ExxonMobil’s recently announced Liza discovery.
“We have worked diligently for the last 18 months on this initiative and are very encouraged by the Liza discovery at Exxon’s Stabroek block, located only a few kilometers away,” Colin Kinley, COO and director of Eco Atlantic said.
“This block and JV with Tullow is consistent with our strategy of accessing high potential petroleum systems in politically stable jurisdictions on cost effective terms,” Gil Holzman, president and CEO of Eco Atlantic said. “The Orinduik block in Guyana has a long license life and we are in partnership with a technically and financially robust partner – well experienced alongside Eco Atlantic, in the international exploration and production space.”
In May, ExxonMobil announced its oil discovery at Stabroek at Liza that encountered more than 90m of high-quality oil-bearing sandstone reservoirs. The well was safely drilled to 5433m in 1743m of water.
In July 2015, Bloomberg published an article quoting a Guyana minister as saying the discovery probably holds the equivalent of more than 700 MMbbl. Wood Mackenzie has called this discovery one of Latin America’s most exciting exploration developments.