Closure of Wales estate an “assault on PPP strongholds” – Jagdeo 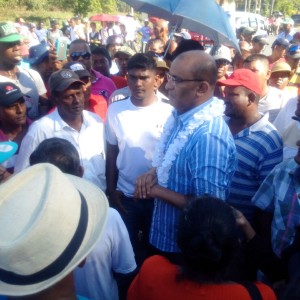 Opposition Leader, Bharrat Jagdeo interacting with workers of the Wales Sugar Estate moments before addressing them about the implications of government’s plan to close the factory.

Leader of the Opposition Bharrat Jagdeo says that the move by the APNU+AFC administration to cease all operations at the Wales Sugar Factory and  Estate of the Guyana Sugar Corporation (GuySuCo)  is a direct assault on supporters of the Opposition People’s Progressive Party (PPP) but it will not bode well for the country.

Jagdeo, addressing cane-cutters , residents and others at Wales on Tuesday afternoon made it clear that his party opposed the move to close the estate as it would deprive sugar workers of jobs. He said the Commission of Inquiry did not recommend the closure of any factory or estate but government has gone ahead and announced plans to close the Wales Sugar Factory by October, 2016. Canes planted by private cane farmers, Guysuco, said would be transported to Uitvlugt, West Coast Demerara.

However, the Government has made it clear that some displaced workers from the Wales Estate will be absorbed by the Uitvlugt Sugar Factory, located several miles away on the West Coast Demerara.

“We have to treat all of our people fairly and equally regardless of their race or religion…It seems as though there is an assault on PPP people…This is seen as another assault on PPP strongholds…we have to vigorously oppose any such actions, actions that are grounded in political action,” Jagdeo told those gathered a stone’s throw from the visibly decrepit sugar factory.

He maintained that the PPP will oppose closure of the sugar industry “whatever” it takes. He said that the Party is prepared to take to the streets to protest any move by the government to close or privatize the industry after a debate on the Commission of Inquiry Report in the National Assembly and planned talks with the government. “I said to the workers in Berbice that if they (government) attempt to close the industry either openly or in a backdoor way, through a hustled privatisation programme, that we will have to all at some point in time take to the streets and we in the PPP are prepared to that to ensure that this government understands that they have to pay attention to the needs of our people, all of our people regardless of who they support,”

Taking it further, Jagdeo noted that while the closure is an assault, it will redound to affect the economy as a whole.

“It has a huge impact on the entire economy of Guyana…It is still one of the largest foreign currency earners for this country…The drainage and irrigation system relies on GuySuCo…You cannot look at it purely from a financial perspective, you have to look at it from an economic perspective…You have to keep sugar alive,” said the Opposition Leader.

“You cant punish PPP people alone…if the sugar workers do not earn the people who sell in the market will not earn…everybody will not earn,” he stated.

The Opposition Leader also stated that several private cane farmers who rely on the estate to take in their produce will now be displaced since it  will be uneconomical to transport the cane to Uitvlugt.

“It will become like a ghost town…they not looking at the impact it will have on villages,” he stated.