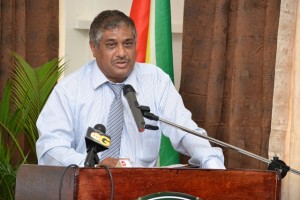 The Private Sector Commission says it concerned about media reports of the recent search, by officials of the Guyana Revenue Authority, of the home of the Commissioner General of the agency, Mr. Khurshid Sattaur, and the seizure of various items belonging to the GRA.

Following is the remainder of the statement

The Commission is both perturbed and concerned at this treatment of a very senior official who has not been formally accused of any wrongdoing.  To the best of our knowledge, Mr. Sattaur is on leave from the entity pending the results of an inquiry.  He has not been asked to resign and as such remains both the de jure and de facto head of the GRA.  In the circumstances, if his electronic communication devices were required for purposes of the investigation, then the proper procedure would have entailed a request to Mr. Sattaur to hand these over to the Board.

We understand that the invasion of Mr. Sattaur’s home was not conducted by the National Police armed with a warrant for search and seizure of items from his home.  This is a violation of his human rights.  It was reported that the officers who went to Mr. Sattaur’s home were officers of the Guyana Revenue Authority and we do not believe that they are or were legally authorized to do so.

This searching of homes of officials of entities under investigation seems to have become common practice and we call upon President Granger to rein in what appears, from all accounts in the public domain, to be a show of excessive enthusiasm on the part of some persons.