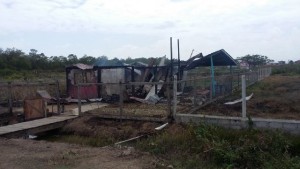 The remains of the house at Hope, West Coast Berbice where a woman was burned to death and her son injured by bandits.

Bandits burned a house early Sunday morning, resulting in the death of a woman and injury to her son who were tied up before the building was set alight, police said.

Investigations are being conducted into the circumstances surrounding the death of Anita Baichan, 49 years, of Hope, WCB, who perished in a fire at her home about 0230h. today Sunday January 03, 2016.

Initial investigations indicate that two men armed with cutlasses entered the home and held up Baichan and her son Khan, 28 years, and demanded cash and jewellery, police said.

The perpetrators were given $30,000.00 but kept demanding more valuables. Having not received anything further from the victims the men used duct tape to tie the hands, feet and mouth of the victims and set the house on fire before escaping.

Police said Khan managed to roll out of the building but subsequent efforts, with assistance from neighbouring residents, failed to save Anita Baichan.

Khan, who was struck about his body with a cutlass during the incident, has been hospitalised.