GECOM has not considered voting by disabled in 2020 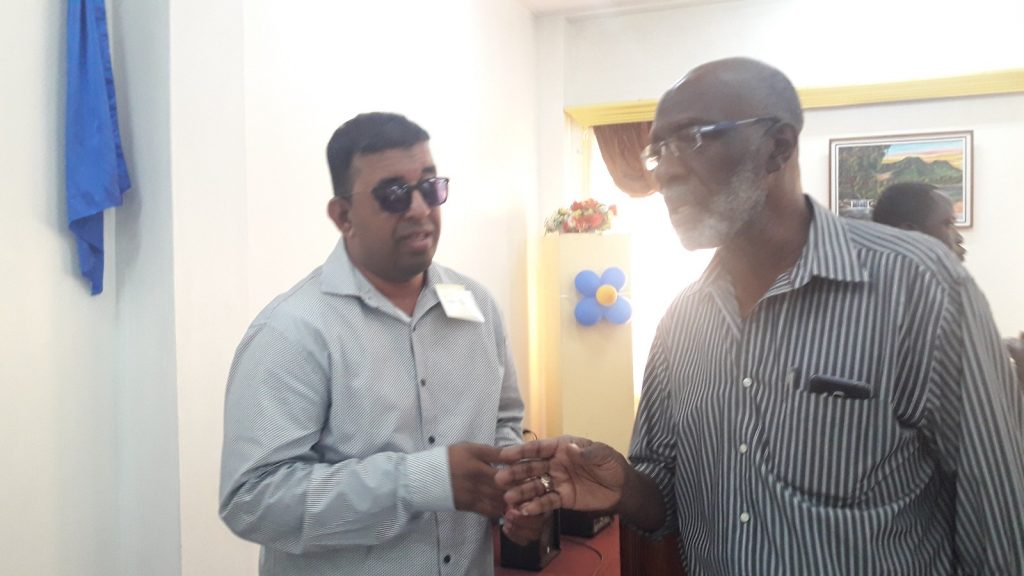 Ganesh Singh of the Guyana Council of Organisations for Persons with Disabilities (GCOPD) and Election Commissioner, Vincent Alexander.

The Guyana Elections Commission (GECOM) has not discussed voting by the estimated 30,000 disabled and visually-impaired persons at next March’s general elections, although provision had been made for physically challenged persons to vote on the kerb of polling stations in 2015.

Concerns were also raised about the confidentiality of balloting by visually-impaired persons who have to vote by proxy with no certainty that the X would be marked next to the parties of their choice.

Under Guyana’s proportional representation electoral system, parties need 4,000 to 5,000 votes to secure a seat in the 65-seat National Assembly.

Elections Commissioner, Vincent Alexander, when questioned by the media at the National Disability Conference 2019 organised by the Guyana Council of Organisations for Persons with Disabilities (GCOPD), said the seven-member commission was unable to discuss balloting by disabled persons.

Earlier he had acknowledged that voting by disabled persons had been discussed previously by GECOM of which he has been a member before the 2015 polls. Alexander, at the conference on Friday, declined to take a position for GECOM for fear that the issued could easily become politicised.

Alexander said GECOM’s policy should respond to the needs of the disabled community to ensure they are given equal access. He said technically, laws might need to be amended and there would have been need for more time to put the required systems in place for the disabled persons to cast their ballots at next year’s elections.

None of the opposition election commissioners was present at the conference that was held at the National Library Conference on Church Street in Georgetown.

Ganesh Singh of the GCOPD said his civil society umbrella organisation would develop a list of recommendations to allow disabled persons to vote independently. He said while the GCOPD did not expect GECOM to use more than 1,000 buildings that are friendly for disabled persons, the commission could at least facilitate kerb-side voting on the ground floors of polling stations so that persons with wheelchairs can “vote independently”. He also said the issue of confidentiality by blind voters is a major issue. “We can never be sure that the person who we asked to vote on our behalf, they are putting the X where we asked them to,” he said.

Singh recalled that a system of cardboard slates had been put in place for blind persons, but they had not been used because the GECOM officials had been unaware of their use. That, he said, had been the explanation by then GECOM Chairman, Steve Surujbally.

American Ambassador to Guyana, Sarah-Ann Lynch said voting by disabled persons “do[es] take time” and while they have been identified,” we still have some way to go too to ensure that elections are fully inclusive”. “I would say that this is a great first step here in Guyana; maybe not the first but follows on a prior process,” she added.