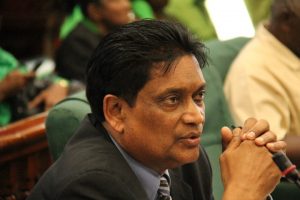 Attorney General, Basil Williams has asked the Caribbean Court of Justice (CCJ) to take new evidence showing that then government parliamentarian, Charrandass Persaud, had known since 2015 that he ought not to have been a candidate because he holds dual citizenship.

In court papers seen by Demerara Waves Online News, Williams told the Trinidad-headquartered Court that on May 11, 2019 Persaud said on a Globespan programme that “I knew that people with dual citizenship could not hold a seat in parliament. That was given, that is a constitutional article that we cannot get away from,” Persaud was quoted as saying.

The Attorney General says he wants the CCJ to grant permission to adduce new evidence which has recently become available “and which will probably have an important influence on the outcome of this appeal, and which is credible”.

Williams wants the court to allow him to make submissions in the consolidated appeals on the relevance of the new evidence to the outcome of the appeal.

Persaud reportedly made the comment a day after oral arguments were concluded into the validity of last December’s no-confidence motion.

The Guyana Court of Appeal has ruled that the motion was not validly passed by 33 votes and had required an absolute majority of 34 of the 65 parliamentary votes.

In an affidavit, State Counsel Mc Alman explained that a YouTube video contains Persaud recalling that Alliance For Change Chairman Khemraj Ramjattan had brushed aside his concerns about being the holder of dual citizenship. Persaud is a Guyanese-Canadian.

Mc Alman states in a second affidavit that she watched the video and heard Persaud saying that “I knew that people with dual citizenship could not hold a seat in parliament. That was given, that’s a constitutional article that we can’t get away from. What I, did in fact argue, and when I told Khemraj, I said ‘I have a Canadian passport.’ Khemraj said, ‘rass with you, a lot of people have Canadian passports. Look at Gail Teixeira.’ That’s what he said.”

Mc Alman added in her affidavit that that was the first time she had heard Persaud admit that he knew that people with dual citizenship were not qualified to sit in the National Assembly. “It was also the first time that I heard Mr. Persaud say that he was aware of the constitutional provision that disqualified persons with dual citizenship from sitting in parliament,” she said.

The State Solicitor said she believed that the Attorney General did not know of the new evidence until Monday this week when it was brought to his attention by Sean Ramdeholl. She added that Williams shared the hyperlink to the video with Belizean Senior Counsel Eamon Courtenay and sought his advice to ascertain whether an application could be made to the CCJ to consider new evidence.

Opposition Leader Bharrat Jagdeo’s lawyer, Senior Counsel Douglas Mendes has already told the CCJ in oral arguments that it was conceivable that Persaud had never known that dual nationals could not be parliamentarians.