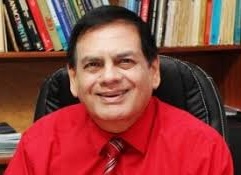 The University of the South Pacific (USP) has appointed Professor Prem Misir as Pro-Vice-Chancellor & Professor and Head of School of Public Health for the new Solomon Islands Campus effective from 15 October 2018, that institution has announced.

USP is instituting a programme in Public Health to be based in the new Solomon Island (SI) Campus and Professor will prepare for the delivery of this programme in addition to act as Head of the SI campus.

Professor Misir has over 15 years of local and international management, leadership, and higher education experience.

His teaching and administrative experience spans both the USA and international settings working in historically underserved populations and with other cultural minority groups. He attained his PhD in Behavioral and Social Sciences from the University of Hull (United Kingdom), and is an Elected Fellow of the Royal Society for Public Health.

In addition, he is the author of both peer-reviewed journal articles and book publications, numbering 10 books, including HIV/AIDS knowledge and stigma published by the University of the West Indies Press; and later this year, Palgrave Macmillan will publish next book manuscript on a multi-country study on HIV/AIDS knowledge and stigma in the Caribbean, South America, and the South Pacific. Palgrave Macmillan published his latest book “The Subaltern Indian Woman: Domination and Social Degradation”, in 2018.

He is also part of international consultancies, as a member of PAHO/WHO Evaluation Team for Renewing Primary Health Care; and CARICOM priorities for the Proposed Regional Goals for Human Resources for Health; and worked as UNDP Consultant where he developed the National HIV/AIDS Workplace Policy for the Government of Guyana.

Professor Misir was also an Executive Director, Health Sector Development Unit (HSDU), Government of Guyana, Ministry of Health: As Head of the Global Fund management team to fight AIDS, Tuberculosis and Malaria in Guyana, he planned and coordinated activities of the HSDU, in order to advance and support the health sector reform process; where the focus is on investing for impact, and developing intervention priorities; and to assure the formulation, implementation, monitoring and evaluation of all externally-funded health sector projects.

Professor Misir became the Vice-Chancellor, The University of Fiji from June 2015 until mid-2018.