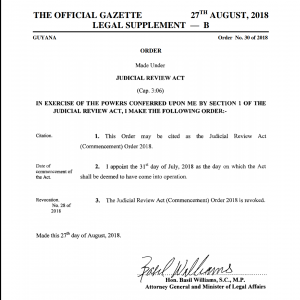 Twelve days after issuing a  commencement order for the Judicial Review Act (JRA) from January 1, 2019 a new order has been issued to instead activate that law from July 31, 2018 in keeping with the Chief Justice, Roxane George-Wiltshire’s order.

The order was published in the Official Gazette states that the previous order issued on August 15, 2018, which had given January 1, 2019 as the commencement date, has been revoked.

Attorney General, Basil Williams told Demerara Waves Online News that  “a mix up” was  subsequently clarified by the Solicitor General, Kim Kyte on her return to work. He said Kyte concluded that the refusal to grant the interim stay meant that the commencement order should have been on July 31, 2018.

After the Court of Appeal  Judge, Rafiq Khan had denied an interim stay of the Chief Justice’s order pending the hearing and determination of the appeal, the first commencement order has been issued.

Williams said the Principal Parliamentary Counsel had reasoned that since July 31, 2018 had already passed, a new date “within reasonable time” should have been set.

After the January 1 date was set, former Attorney General Anil Nandlall had moved to the High Court in contempt of court proceedings aimed at having Williams imprisoned.

The case has its genesis in the Nandlall moving to the High Court to compel Williams to activate the law.