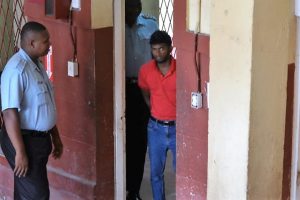 A man, who police said confessed to the killing of an official of Guyana Goldfields, was Tuesday arraigned on a charge of murder.

City Magistrate Daly remanded the accused to prison until June 18, 2018.

A security guard for the Canadian-owned Guyana Goldfields/ Aurora Goldmines discovered Whyte’s nude body with several stab wounds on May 21 i his apartment at Thomas Street, Georgetown. Initially, a man from East Canje, Berbice had been arrested and considered the prime suspect.

The Guyana Police Force said the accused man admitted to the crime and led investigators to a house at 5th Street, Alberttown, Georgetown where Whyte’s belongings and the murder weapon were handed over to police.

An autopsy showed that Whyte, who was a procurement specialist at Guyana Goldfields, died from multiple stab wounds.