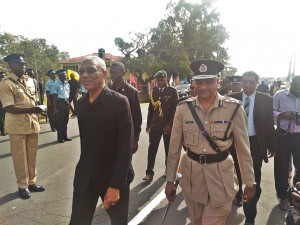 Police Commissioner, Seelall Persaud was Friday sent on leave “in the public interest”, ahead of his retirement at 55 years old five months from now.

The substantive top cop was due to resume duty on Friday at the end of four months of accumulated annualised leave.

Instead, he was sent a carefully worded letter by Minister of Public Security, Khemraj Ramjattan on Thursday, telling him to stay home.

“It is the considered opinion of the administration that you should be and you are hereby directed to proceed on special leave with effect from November 24, 2017 until further notice,” Ramjattan said in the one sentence letter. Though the Public Security Minister’s letter refers to “your resumption of duty” it does not give a date.

Seelall will attain retirement age on April 18, 2018 bringing to an end a 33-year long career in policing.

Some observers believe that Cabinet is divided  on whether Seelall should be asked to resign or the constitutional clause  should be invoked for him to face disciplinary action for alleged infractions during a probe into an alleged plot to assassinate President David Granger.

Another option, observers noted, could be to allow Persaud to remain on the payroll until his age of retirement.

Ramjattan, who has already publicly stated that he has his own views about the findings and recommendations contained by the Commission of Inquiry into the alleged assassination plot, appeared to have avoided taking responsibility for instructing the Police Commissioner to stay off the job.

The lone sentence begins with “I am advised to inform you”. The Public Security Minister told the Police Commissioner that he wants him to proceed on special leave to allow the current management team to push ahead with a number of programmes. “I am advised to inform you that in the public interest and to allow for continuing initiatives and innovations being pursued by the Guyana Police Force’s temporary administration to be completed before your resumption of duty, it is the considered opinion of the administration that you should be and you are hereby directed to proceed on special leave with effect from November 24, 2017 until further notice”.

Persaud joined the Guyana Police Force on October 15, 1989. He was confirmed Police Commissioner in March, 2015 by then President, Donald Ramotar.