Eighth prisoner captured in his hometown; overall nine still on the run 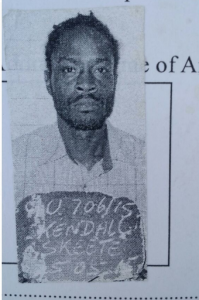 Another prisoner, who escaped from a swampy area at the Lusignan Prison through a muddy hole, was Wednesday morning recaptured in Linden.

Police identified him as Kendal Skeete as among those who had been wanted for escape from lawful custody. He was captured at Wisroc at about 11:15 AM.

He was among 13 persons who burrowed out of the East Coast Demerara penal facility for high-risk prisoners early last Monday morning.

With his capture, five others from last Monday’s escape are still at large.

Overall, nine are still on the run because lawmen are yet to apprehend four who bolted from the Camp Street-based Georgetown Prison on Sunday, July 9, 2017 before that jail was destroyed by fire.

Since the escape of the 13, authorities on Monday transferred the remaining 86 to the brick prison at Camp Street.

The four from the July 9 escape, who are yet to be captured, are Stafrei Hopkinson Alexander, Uree Varswyke also known as Malcolm Gordon, Bartica massacre convict Mark Royden Durant also known as Royden Williams,  and Cobena Williams.