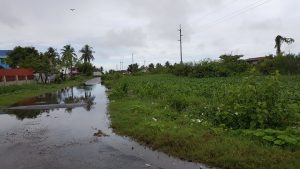 One of the several East Coast Demerara canals clogged with vegetation.

Residents along Guyana’s densely populated coastland on Saturday continued to be affected by severe flooding due to heavy rainfall, and the situation may worsen if bad weather continues for the next two days days.

As far as Number 28 Village, West Coast Berbice and the lower East Coast Demerara, yards and farmlands have been inundated with flood waters.

While the Ministry of Agriculture assures that most pumps are working and there has been no over-topping of the East Demerara Water Conservancy, many major canals in several parts of the city have been clogged up with thick vegetation for several months now.

The commercial heart of the capital, Georgetown, was not flooded badly as had been the case in recent years.

One of the worst affected East Coast Demerara villages is Buxton where livestock have either been left to fend for themselves or have been moved to safer locations. Farmlands especially aback the village have been also been adversely affected by the floods.

Minister of Public Infrastructure, David Patterson and Minister of Agriculture, Noel Holder, during a short visit to one of the flood-affected streets of Buxton, told reporters that the Civil Defence Commission (CDC) would be summoned to assist residents and there are plans to install two pumps at Vigilance and Buxton to drain six miles of canals.

“When we go back, we will ask the CDC to prepare the normal sanitation packages for the people at the back here (Buxton) and the lower East Coast, we would see what interventions we could take,” Patterson said. 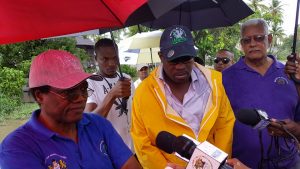 He acknowledged that from the University of Guyana to Ogle have been also severely flooded because one of the two pumps stopped working on Friday and requires a “major part.” The Public Infrastructure Minister has since announced that an unused pump at Strathspey, East Coast Demerara would be relocated to Ogle to replace a pump there that is not operational.

Minister of Agriculture, Noel Holder said almost all of the pumps have been deployed from Charity, Essequibo to Moleson Creek, East Berbice. “Currently, while all NDIA pumps are operable they are all deployed helping out in different communities so shifting around is not very easy to do,” he said.

The Minister of Agriculture said the “long range solution” for Buxton and nearby villages includes the construction of pumping stations at Buxton, Vigilance and Lusignan by 2019.

Chief Executive Officer of the NDIA, Frederick Flatts said two the three stations would be finished before the next rainy season due in December, 2017. The total cost of all three pumps is GYD$600 million. “The fact that we are building those pump stations shows that we recognise that there is a deficit in the pumping capacity,” he said when asked by Demerara Waves Online News.

Chairman of the Neighbourhood Democratic Council, Deon Abrams expressed optimism that the installation of the new pumps would be a major incentive to revive agriculture in Buxton.  He said currently surveyors are in the backlands examining the entire drainage system to complement the NDIA’s work. “We are hoping once all these systems are put in place that we will have a general improvement in the capacity of the village to be relieved of this kind of situation (flooding),” he said.

Farmer, Tony Barth told reporters that his duck coop is flooded and he lost ducklings and eggs. He said the water is remaining on the land longer because Buxton depends on gravity drainage through a sluice (koker) instead of a drainage pump to discharge water over the seawall.

“We only get a ground sluice. We ain’t get no throw-over (pump) so as long as the tide is high out there and rain falling, this would be a regular day for us,” he said. 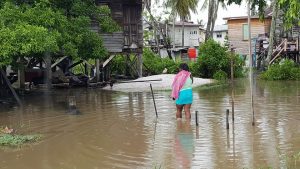 A resident of Buxton walks across bridge, hidden by flood waters, to a house.

The NDIA Chief Executive Officer said “so far there is no issue” with the conservancy dam and the authority was prepared for any eventuality. “Even if we were to have an issue, we have right now about more than 10 excavators in the area so even if you were to have an issue with the dam we can take care with it,” he said.

The NDIA, he said, is operating all 58 pumps along the coast. He said there was a problem at Taymouth Manor.

Flatts said an NDIA contractor and and engineer were sent to probe a report of a non-functioning pump at Rose Hall, but there was no evidence to support the claim. “We are now investigating how come we were told that the pump was down and it’s working. We didn’t find any problem,” he said.