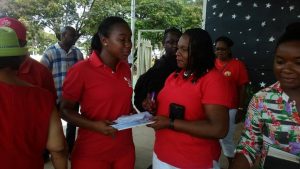 The David Granger administration was Monday (May 1, 2017) called out over its failed promises to workers, when union leaders gathered to join with others across the globe to celebrate Workers’ Day/Labour Day/May Day.

Among the presentations to the modest crowd which converged at the National Park following the traditional route march, was Guyana Labour Union’s (GLU) Executive Member, Latoya Drakes, who roundly criticized the President for preaching one thing while practicing completely counter, initiatives.

Addressing the Labour Day Rally on behalf of the younger demographic, Drakes said “for the youths of Guyana, the situation at this time is depressing and ahead it is not the hope filled rosy picture we expected.”

According to Drakes, it is instead, “disheartening that promises of youth empowerment and the creation of new, stable and decent jobs remain largely unfulfilled at this time and the promises of a Good Life seems nowhere on the horizon.”

The young GLU Executive Member in an impassioned plea to the administration said “today more and more we see our people facing challenging times and the various  pressures are mounting…We see read and hear about declining employment opportunities, economic regression, increasing cost of living and hiked and new taxes.”

Delivering one of the few presentations that appeared to capture the attention of the sparsely populated National Park bleachers, Drakes said the future continues to appear bleak for the youth of the nation, “especially those from poor families.”

She used the occasion to recall Head of State Granger, “rightly saying, education will take us from poverty to prosperity, thus it is saddening to record that despite the president’s belief we see measures being taken that run counter to such objectives.”

According to the GLU executive member, she was referring to the application of the Value Added Tax (VAT), “on private education as well as the massive hike, in the University of Guyana tuitions fees.”

Drakes surmised that “the pursuit of such decisions will serve to put out of the reach, the chances for many of our young people to become more educated—something which is much needed especially at this phase of our development.”

According to Drakes, the Guyanese youth today is being confronted with increased unemployment and under employment.”

She said this sad state of affairs has its origin “in the steadily declining economic circumstances, which have gripped our country lately.”

The GLU member posited “in such trying times we see many youths being forced to contend with difficult realities and decisions.”

Turning her attention to the government representatives in attendance—including Minister of Natural Resources who was at the time representing Head of State Granger—Drakes said those “who have the task of making our economy work must address the question of job creation and at the same time seek to prevent the closure of enterprises which only aggravates the unemployment situation.”

The GLU was not one of the several unions that Granger was down to visit later Monday. That union is part of the opposition-leaning Federation of Independent Trade Unions of Guyana. GLU General Secretary Carville Duncan was several months ago ousted from the Public Service Commission after he fell into legal hot water concerning payments he had received as a then board member of the Guyana Power and Light (GPL).

Another of the female union leaders to address the 2017 Labour Day Rally was Guyana Trades Union Congress (GTUC) President, Corretta McDonald, who used the occasion to address the leadership of the various unions across the country in another clarion call for better organization and unity.

The recently elected, first female President of the GTUC, in her inaugural address in that capacity called for deeper self introspection on the part of the union leaders before looking to chart a course forward in tackling the numerous challenges that still confront workers in Guyana.

According to the GTUC President, “we demand change of attitudes, accountability, commitment and selfless service from our leaders…too many of us sometimes push our members under the bus.”

She used her time at the podium to also echo the sentiments of other speakers that spoke to the need for the unionized bodies in Guyana, to evolve in order to meet with the changing times.

Veteran Trade unionist and GTUC General Secretary, Lincoln Lewis, in his remarks to the 2017 Rally, also chided union leaders but equally lauded the show of unity and demands for the re-establishment of a Ministry of Labour and to return to the bargaining table over wages and salaries for public servants.

He recalled that in 2011 while he was then Leader of the Opposition, Granger called for a united trade union—a call he repeated recently when he addressed the opening of the GTUC Congress.

According to Lewis, the union has since heeded the calls of now Head State Granger, as is evident on the diversity of the 2017 May Day Rally platform.

The GTUC General Secretary said, it is with this unified voice that the trade unions are now demanding that government return to the bargaining tabled over the stalled talks on increased wages and salaries and other benefits.

“Today we in the trade union movement unified by President Granger raise our voices in unity calling on him to restore collective bargaining in the public sector and return the agency shop for the public service unions,” he said.

According to the union leader, these were the things “undermined by the previous government that President Granger would have condemned, indicating that under his stewardship things will be different.”

Lewis said too it is with a unified voice that trade unions are now also demanding of President Granger, his intervention in the longest running labour dispute currently on cards relative to the Bauxite Company of Guyana Incorporated (BCGI) and the representative union.

On the matter of reopening the Ministry of Labour, Lewis told the 2017 May Rally, that the unions continue to make its demand since, “This ministry is important for shaping and executing labour policies that affect all workers, past, present and potential.”

He concluding with a direct appeal to Head of State Granger saying, “we the people, trust that these requests today will not be a challenge for the President given his stated commitment and desire for trade union unity, and that which he has sought and achieved here today.”

May Day is a public holiday celebrated in scores of countries across the world in recognition of workers struggles over the years and was observed locally under the theme, “Organising: A Pre-requisite in Building a Strong United Trade Union Movement.”

The march and rally was organized by the GTUC and the Federation of Independent Trade Unions of Guyana (FITUG)—together representing several thousand unionized public servants across the length and breadth of the countries across various industries.