Nandlall defends govt paying for his law reports: “When I took this job, I took it at a loss of income”; plans to challenge criminal charge in High Court 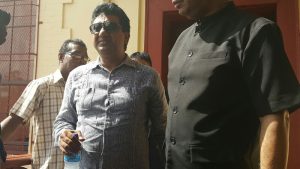 Former Attorney General and Minister of Legal Affairs, Anil Nandlall has defended government paying his law reports subscription during his tenure, saying it was to compensate for a loss of income.

“I requested that… and the State granted it because when I took this job, I took it at a loss of income, that I was earning much more and part of the package which I negotiated was the payment of my subscription for the law books,” he said. He argued that the State cannot produce any document showing that it paid for his law books.

Former President Donald Ramotar has already stated that he had approved the State paying for the law report subscription as part of Nandlall’s conditions of service. Presidents and former presidents are immune from prosecution.

Nandlall also said there was nothing wrong with such an arrangement, adding that the State had also paid his electricity and phone bills as well as his subscription fees. “The State can’t take my cellphone because it paid my phone bill. It can’t claim my electrical appliance because they paid my light bills. Similarly, they can’t claim the law books. They have no relationship with the supplier of that law books,” he said.

He was charged with larceny by bailey of 15 Commonwealth Law Reports valued at GYD$2.3 million which he allegedly fraudulently converted to his own use. He was released on his own recognisance – not cash bail- and told to return to court on May 9, 2017.

Nandlall, 44, believed that the charge was politically motivated because he repeatedly criticises his successor, Basil Williams, and exposes what he terms “his incompetence”. “This has nothing to do with the law books. This has a political and a sinister motive,” he told reporters shortly after exiting City Magistrate, Fabayo Azore’s courtroom.

Questioning the logic behind the State spending millions of taxpayers’ monies to prosecute him for law reports now valued at US$2,000, he suggested the most the State could do “is to file a civil claim to recover the monies that they have paid. The State has no connection to those law books either by title or otherwise.”

The former Attorney General said the charge should not have been instituted against him by the Guyana Police Force’s Special Organised Crime Unit should not have been instituted because he has already moved to the Constitutional Court of the High Court to block the seizure of the law reports on several grounds including the deprivation of property.  He said the criminal charge would be challenged in the High Court.

Nandlall appeared to bask in the fact that he was charged. “The fact that they have charged me, they have catapulted me into a line of very illustrious politicians who have all been charged as part of the political struggle,” he said.

2017-04-28
Denis Chabrol
Previous: UG votes against rental of five-story building for downtown campus
Next: Background checks to be conducted on new candidates for Police Commissioner- Harmon