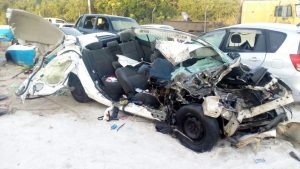 The car that was being driven by Simon Paul.

A former trainee nurse was killed in an accident on the Linden-Soeskdyke Highway early Sunday morning when the car he was  driving collided with a heavy duty truck.

Traffic Chief, Dion Moore said the accident happened at about 12:30 AM. Investigations so far revealed that Paul was driving car bearing license number PVV 9105 when he collided with the truck, GFF 5346, that was heading to Linden.

“The car ended up in the path of the truck and there was a head-on collision,” said Moore. The truck driver was treated at a hospital for injuries and was detained as part of the ongoing investigations. 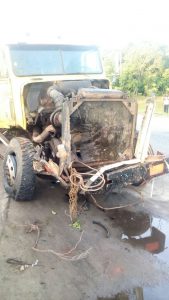 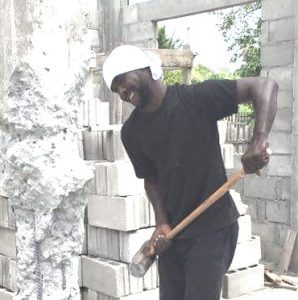 Moore said the truck driver was tested for alcohol and it proved negative.

Paul left nursing school and opted to get into small businesses. Up to the time of his passing, he was a taxi driver and a cement block maker