Man dies in fire at Timehri 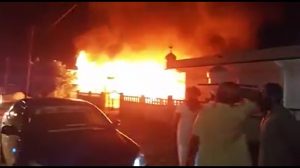 Fire destroying the house next to the Timehri Masjid, East Bank Demerara.

A man was early Wednesday morning burnt to death at his dwelling at Timehri, East Bank Demerara.

He lived in a heavily secured wildlife pen that he had converted into a dwelling.

Fire Chief Marlon Gentle, said the man believed to be in his 50s was an alcoholic and had hours earlier threatened to burn the building because no one was giving him any money.  He has been identified as Adam Shaw.

Eyewitnesses said the incident occurred shortly after 3 AM at the house located next to the Timehri Masjid.

Even as they awaited firefighters, the house was being engulfed in flames.

Persons in the area said the man was seen clinging to the security grill. No one was able to remove the grill to allow the man to exit the building.

Gentle said several years ago, Shaw had attempted to burn a house where he and his family had resided.