“No exclusive parking in the City” – Mayor Chase-Green 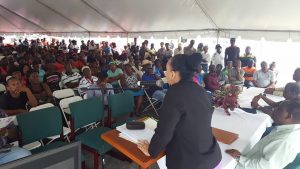 City Mayor, Patricia Chase-Green addressing vendors and other business-owners at a meeting that was held in City Hall’s compound.

As the High Court prepares to hear City Hall show cause why the controversial parking meter contract should not be revoked, Mayor Patricia Chase- Green on Friday said businesses would not be allowed to designate no-parking areas in front of their premises.

“What we also have again are- some vendors, the majority of business people- blocking their entrances with ‘No Parking Signs’ or putting up barriers all along Regent Street, Robb Street, Water Street. No one can park. There is no exclusive parking in the City of Georgetown,” she told a meeting with vendors in City Hall’s compound.

Chase-Green said that except for banks that are granted permission for exclusive parking for security reasons, other businesses would no longer be allowed to do so. “That has to stop. The city streets are not the exclusive right of anyone. It is for the use of every single Guyanese citizen, and we already have the congestion of parking where you have double and triple parking in the city streets,” she said. The Mayor added that Council would “not be entertaining any applications for exclusive rights for ‘no parking signs’ in front of any business unless it is the bank.”

Further restrictions on parking were announced one day after Mohendra Arjune secured an order from Chief Justice Yonnette Cummings-Edwards for the Mayor and City Council to show cause why the agreement with Smart City Solutions should not be scrapped on several grounds.

That matter comes up for hearing before Justice Brassington Reynolds on February 27.

Arjune, through Attorney-at-Law Kamal Ramkarran, says the Council did not comply with the mandatory pre-requisites as set out in Sections 230 and 231 and the Municipal and District Councils Act, Chapter 28:01 of giving notice of the proposed execution of work to erece and maintain parking meters and inviting tenders for agreements to do so before entering into the said agreement on or around 13 May, 2016 with Smart City Solutions. Arjune further contends that the Mayor and City Councillors have unlawfully and in an ultra vires manner delegated their statutorily-derived power to erect and maintain parking meters in keeping with the Municipal and District Councils Act to Smart City Solutions Inc

The agreement, the applicant states, violates Guyana’s laws that prohibit monopolies and that the Mayor and City Councillors have fettered their discretion and that of future Mayors and Councillors for a period well in excess of the term of their office from exercising their discretion as required by law on the issues of parking in Georgetown.

Arjune adds that by exempting certain categories of persons parking in Georgetown such as teachers and employees of the Bank of Guyana from paying fees for parking and by failing to exempt other people working and parking have acted in an arbitrary, discriminatory, irrational and  unreasonable manner.” He says also that the exemption of persons or categories of persons from paying fees for parking in Georgeteown is contrary to the operation of the rule of law.

Meanwhile, Mayor Chase-Green signaled that soon City Hall would be preventing the trucking of shipping containers because the law empowers the administration to determine the types of trucks, when and which roads they should use.

“In collaboration with the Ministry of Infrastructure, those things will soon be implemented because it is unfair for you to be driving on a busy day behind a container, and you know the dangers of that,”

The Mayor and City Council is already charging for the movement of shipping containers on Georgetown’s roads, ahead of a finalized agreement with the Private Sector Commission.