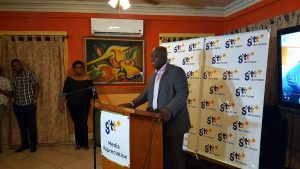 The Guyana Telephone and Telegraph Company’s (GTT) Chief Executive Officer, Justin Nedd hopes that long requested landline rates will be increased ahead of liberalization of the telecommunications sector.

“One of the things that is extremely important to us is being able to work with the Public Utilities Commission to ensure that we get landline rates before liberalization,” he told the media at a reception held Friday evening at Grand Coastal, Le Resouvennir, East Coast Demerara.

Landline rates have not been increased since 2012 and in 2015 after the PUC had formally rejected an application for rate increases, GTT moved to the Court of Appeal.  GTT’s Director of Rate Making, Gene Evelyn said PUC Chairman, Justice Prem Persaud urged the phone company to withdraw its case and return to the Commission.

Nedd said the phone company has been providing the regulatory authority with information to “enable them to make an informed decision and a timely decision to get us those rates.”

Director of Rate Making at GTT, Gene Evelyn said it is important that the Public Utilities Commission (PUC) approves the rate hike before Digicel lowers its rates significantly. “When you liberalise and you bring in competitors,  you don’t even have to bring in. If you liberalise tomorrow Digicel will push that rate down because they will try to hog the traffic and the ‘man’ will send the traffic to the ‘man’ with the lowest rate and when it hit Digi here, Digi will then distribute so this hearing here is so important that I don’t even think the Guyanese public understands,” he said.

Evelyn warned that at the next PUC hearing, “lines have to be drawn” and GTT might return to the court if there is no rate increase. He noted that the PUC Act empowers the Commission to grant a temporary rate pending the outcome of a rate hearing.

Evelyn said over the years, GTT has suffered a significant decline in revenues from settlement rates with other carriers like AT&T and MCI in the United States because more persons are using Voice Over Internet Protocol (VOIP) services and applications such as WhatsApp. He said GTT had once earned 83 US cents per minute from each call that had originated in the US but has been earning less than 17 US cents per minute since 2002.

“The international rate reductions for outbound calls are humongous, massive and all the rates that we are asking for domestic rates are modest,” he said .

Evelyn said the required landline rates being requested are lower than those being paid for cellular calls and, if granted, would help GTT to break even or make a slight profit.

Already, GTT has trimmed its staff and taken other steps to reduce its operational costs.

The Guyana government last year passed modern telecommunications legislation and amendments to the PUC Act to pave the way for liberalisation. GTT, which says it still enjoys a monopoly on international voice and data, is currently in talks with the Ministry of Public Telecommunications and the Guyana Revenue Authority (GRA) to pave the way for a competitive telecoms market. ”

“We continue to work together and to push for liberalization and to ensure there is a level playing field with current and future competitors. All we want is to operate by the same rules, the same regulations  as everybody else,” the GTT CEO said.

Nedd described talks with the relevant government stakeholders as “meaningful and sustainable,” saying there is a “sense of urgency and forthrightness” and that “dialogue with government agencies is very productive.”