Omar Shariff has been fired from the post of Permanent Secretary of the Ministry of the Presidency.

The ministry said his services have been terminated with effect December 31, 2016.

The subject of a probe into alleged financial crimes by the Special Organised Crime Unit (SOCU) , Shariff has denied such allegations but has conceded that he has unsettled tax matters with the Guyana Revenue Authority in relation to the sale of phone credit.

Government said  Ms Abena Moore has been appointed to the position of substantive Permanent Secretary as of January 3, 2017.

On June 30, 2016, Mr. Shariff was sent on leave by Minister of State, Mr. Joseph Harmon, pending an investigation by the Special Organised Crime Unit (SOCU) of the Guyana Police Force.

Shariff, a one-time staunch supporter and member of the People’s Progressive Party up to the time it lost power in the May 2015 general elections, appeared briefly in the Magistrate 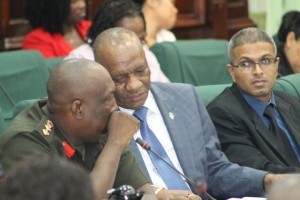 Minister of State, Joseph Harmon (Center) with Permanent Secretary of then Ministry of the Presidency, Omar Sharif at right.

His lawyer succeeded in having the contempt case put down until a decision is made in a High Court challenge he has filed.