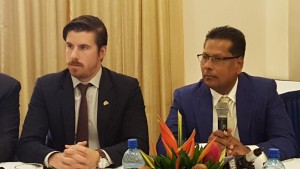 GPL’s Chairman of the Board of Directors, Robert Badal said that the US$7.4 million component of the Public Utility Upgrade Programme would be used to hire seven engineers and other training experts from Manitoba Hydro International with global experience.

“A lot of the component is working along with executive management on coaching…,” he said. That is in addition to classroom sessions over the next six weeks.  “They won’t be managing, they would be advising,” Badal added.

“Our aim at the end of the programme is to, in partnership with GPL, have  effective positive results on not only how they do certain processes and certain plans but also to move forward along those plans,” Russel said.

The project also caters for an additional US$43 million to be spent on 830 kilometres of  medium and low voltage distribution network cables, 54,000 smart meters which would be read remotely and the improvement of several sub-stations to reduce losses

The Chairman said under the project, which is being funded by the Inter-American Development Bank (IDB) and the European Union (EU), a needs analysis is currently being conducted to determine the level of training and in the desired areas.

GPL’s acting Chief Executive Officer, Renford Homer welcomed the programme and said he was very optimistic that it would play a major role in improving the quality of service to be provided to electricity consumers. “The expectation is that it will lift our standard and that as we are assessed over that period and going forward, we would expect to see incremental improvements that would suggest that, as a company, we are surging forward in the direction that we need to go,” he said.

Homer said GPL has never exposed to the depth and lengthof training that Manitoba International would be providing.

The project will build the capacity of executive s and management, establish international standards, implement best practices in the generation and delivery of electricity, improve operational deficiencies  and create an automated inventory system. Focus will also be on network operations and integration.

Manitoba Hydro International, with more than 30 years of experience from its century-old domestic operations in Canada, provides expertise in about 80 countries.

2016-10-13
Denis Chabrol
Previous: Integrity of new Oil and Gas Association boss under microscope
Next: Young woman accused of burning down house in Mahdia