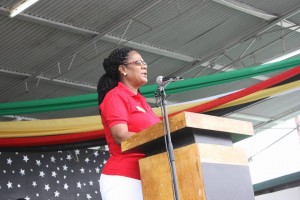 Long standing Trade Unionists were handed a blast at a unified May Day rally as younger members of the fraternity call for an end to “selfish and immature” trade unionism.

She told those gathered that it is time that the trade unionists cease playing politics with their egos and place the needs of Guyana’s labour force on the front burner.

Van Sluytman said that it is time persons who think they have reins on the labour movement be relieved of those reins.

“It is necessary for some of them to put away their selfish and immature behavior and work better for all of us…whether you unite or you separate we are punishing while the grass growing and the horse are starving,” said Vansluytman.

“We want them to know that it is time for them to change especially those veteran trade unionists who think the only way to effect change is to be antagonists,” the Committee rep added.

She said that instead of a cosmetic display of unity, the trade unions should all come together for the working class.

“We do not want any dress-up unity…If you start back unity today let it be continuous for the benefit of the worked…We are saying pay interest to the real issues affecting us as workers in Guyana,” she emphasized.

The worker representative said “The same issues that will affect members of GTUC will be the same issues affecting FITUG workers.”

Referring to the Public Service Commission of Inquiry, she said that it is time the CoI wraps up its work so wage negotiations can commence.

Recalling 2015’s May Day Rally, VanSluytman noted that persons were urged to vote for change and that call was realized with the election of the APNU+AFC administration but some things still remain the same.

“While at one end of the spectrum some things have changed at the other end there are still many issues affecting us as women,” she noted.