Gary Best to be charged with causing death by dangerous driving 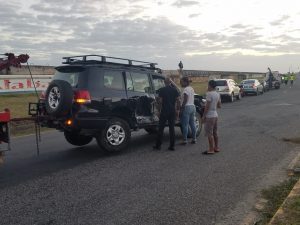 Gary Best (clad in black) at his vehicle at the accident scene.

Former Chief-of-Staff of the Guyana Defence Force (GDF), Retired Rear Admiral Gary Best is to be charged with causing death by dangerous driving and driving under the influence of alcohol.

The Director of Public Prosecutions Chambers recommended to police that Best be charged with the offence. The DPP received the file on Tuesday and it was returned on Wednesday.

His Attorney-at-Law, James Bond planned to speak with him some time on Thursday. Police confirmed receiving the file but could not say when Best would be charged and arraigned before a city magistrate.

Police said a breathalyser test proved that Best’s alcohol level exceeded the prescribed limit at the time he struck down well-known cyclist, Jude Bentley, on Clive Lloyd Drive in the vicinity of the Russian Embassy turn on Sunday, February 8, 2020.

He has since expressed his profound sympathy to the family, relatives and friends of Bentley, and he has also pulled out of public campaigning for the reelection of the incumbent A Partnership for National Unity+Alliance For Change (APNU+AFC).

Best is an executive member of the People’s National Congress Reform (PNCR), the biggest and most influential party in APNU and the wider coalition.

Previous: 43 soldiers, police at Eteringbang did not vote last week
Next: March 2 Election Day a holiday