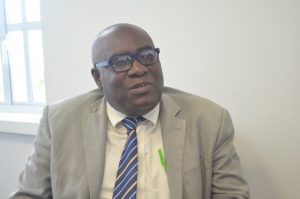 Minister of Education, Nicolette Henry on Wednesday scotched rumours in some circles that Chief Education Officer (CEO), Marcel Huston has been fired.

The process, she outlined, would include the processing of his pension and gratuity as well as allowing him to take his accumulated leave. The education minister explains that the Chief Education Officer will proceed on all due leave which will take him into retirement next year. “There is no such thing as firing. This is his statutory retirement age and this is in keeping with the public service rules; there is nothing sinister about it,” Henry assured.

On the issue of Mr. Huston being sidelined from key meetings, Minister Henry denied that was so. “When officers are going off on retirement, that is the time you’ll want to build the capacity of those that will be succeeding him,” she said, adding that the Deputy Chief Education Officer and Assistant Chief Education Officer were being “exposed to more meetings”.

She says the Deputy Chief Education Officer, who will assume the CEO duties, has been participating in those meetings as a way of building capacity ahead of Mr. Hutson’s retirement.