PPP’s Lumumba to give up US citizenship – Jagdeo 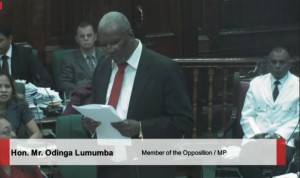 Long-serving People’s Progressive Party Civic (PPPC) parliamentarian, Odinga Lumumba, has been added to the list of opposition lawmakers who would be giving up his foreign citizenship, Opposition Leader Bharrat Jagdeo said Wednesday.

He also accused the coalition administration of being “duplicitous” by failing to remove its dual citizenship members from the House as a matter of political goodwill in accordance with the decisions of the Guyana High Court and Court of Appeal.

He said while the coalition administration was taking advantage of the fact that the Court of Appeal invalidated the no-confidence motion because it was not passed by an absolute majority of 34 votes, the Granger-led administration has frowned on the decisions that say the dual citizenship candidates and parliamentarians are unconstitutional but can be challenged by either an elections petition or a constitutional case.

“You cannot be convenient in arguing or upholding of the court and then deal with this matter in such a duplicitous, almost without decency, absolutely no decency,” he said.

Jagdeo said he has to speak with PPP backbencher Adrian Anamayah about whether he would also be renouncing his foreign citizenship.

Opposition Chief Whip Gail Teixeira has already stated categorically that she would renounce her Canadian citizenship and that steps would be taken to replace her if the National Assembly has to meet on electoral-related matters.

Jagdeo has since announced that the PPP would not be participating in sittings of the House until the Caribbean Court of Justice (CCJ) hears appeals related to the no-confidence motion that was passed on December 21. The regional court is Friday expected to hold a case management conference to set several deadlines including the date for a decision.

The Opposition Leader also flayed the administration for allowing Foreign Minister Greenidge to act as President in spite of his dual nationality.

Previous: OPINION: The arrogance and hubris of Bharrat Jagdeo are not working for the PPP
Next: OPINION: House-to-house de-registration unconstitutional