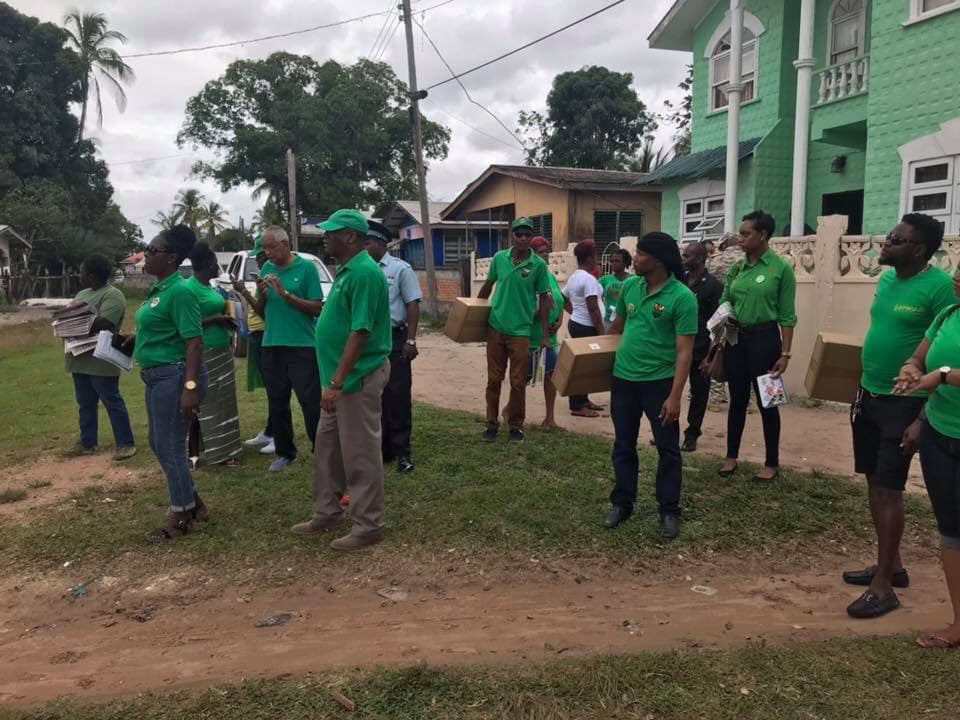 Minister of State, Joseph Harmon, and other activists and supporters on a walkabout in Linden.

Several government ministers were on a fan-out exercise in several communities across Linden, making promises and highlighting achievements as the three-year-old coalition gears up to seek a second straight term in what could very well be early general elections.

Decked out in their parties’ political colours of gold for the Alliance For Change (AFC) and green for the People’s National Congress Reform-dominated A Partnership for National Unity, the fan-out is believed to be the first major joint  political exercise since the two political organisations launched their campaign committee on February 1st.

Hughes represents AFC and Sharma is from the Justice For All Party (JFAP), while the others are from the PNCR.

The Government’s Department of Public Information (DPI) reported that Hughes “was part of a much larger team of government ministers and officials who spent the day in Linden listening to concerns raised by the residents to craft tangible solutions.” The ministers were also seen sharing out campaign material.

The Public Telecommunications Minister was quoted by DPI as trying to convince the residents that the government has been tackling years of neglect in the face of calls by residents for more to be done. “We know that things are happening but of course there is an urgency in communities to see more done and so I spent a lot of time trying to explain that a lot has been done but even more needs to be done and so the challenge is always to say to people that we are working, there are things that you are seeing that we have done and together we are working to get even more things done… The challenge is that so many of these communities were neglected for decades that we are now playing catch up,” Hughes was quoted as saying. 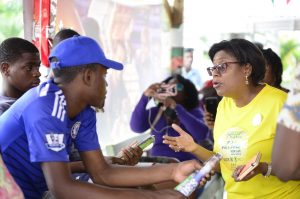 Hughes reportedly promised youths in the once thriving bauxite mining town that 200 of them would be employed at a call centre which government would rehabilitate by year end at a cost of GYD$60 million. The building which previously housed the call centre, Toucan Connections Incorporated, has been identified for rehabilitative works. In 2015, the management of the call centre at that time abruptly ceased services putting more than 90 persons out of a job.

Ferguson pledged that her ministry would be working closely with Region 10 and the Linden Town Council to bring about changes to the community.

Hughes cited the need for the regional systems to work properly. “The more and more I walked around I realised that some of our regional systems are not working as efficiently as they should and this, of course, I think is because we don’t have a history of Local Government Elections, so it’s a slow process, but we got a lot of positives. We saw a lot of people doing amazing things,” Minister Hughes said.

In addition to this, Minister Hughes advocated for more young persons to broaden their horizon in the field of Information and Communications and Technology (ICT). While in Linden, the Minister met with a group of young people who were undergoing training.

“I am preparing Guyana to become one of the ICT hubs of the Caribbean, and that depends on each and every one of you knowing this stuff (computer and technology) back to front,” the government’s Department of Public Information reported her as telling the residents.

Minister Hughes advised all residents of the community she visited that they too must seek training in the field of ICT in preparation for the various opportunities that would present themselves in needed skills and competence.

At Blueberry Hill, Harmon donated three street lamps that are to be placed at strategic points on the main road that had no lights.

Elders and leaders of the village, Daphne Sandy, Ruth Davis and Collette Duncan who received the lamps on behalf of the community expressed gratitude to the government for the much-needed lights. 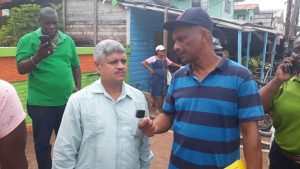 Duncan said that street lights will effectively improve security in the community. “Lighting is one of the security aspects of any community and so I’m grateful to be receiving these lights. It will be placed on the public road where the residents will benefit,” Duncan told the Department of Public Information (DPI).

Minister Harmon said that this is a fulfillment of a promise made to the residents of the community, noting that “we have delivered as we always do.” He told the residents that the APNU+AFC coalition is the “Government of the day” and will continue to deliver services to the Guyanese people.

Over the past three years, the government installed 100 street lights on wallaba poles and also installed interconnecting cables between Burnham Drive, Mackenzie and the Wismar sections in Linden.