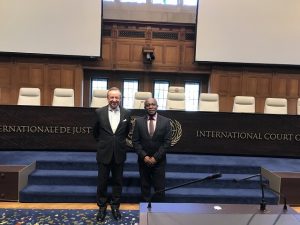 Minister of Foreign Affairs, Carl Greenidge said none of the US$18 million ExxonMobil signing bonus has been spent so far on legal fees for the Guyana-Venezuela border controversy case at the International Court of Justice (ICJ).

Greenidge said Cabinet has decided that as the need arises each year, the money would be transferred to the special account at the Bank of Guyana to the Consolidated Fund to “meet the estimated expenditure” for the lawyers. He added that during 2018, the Finance Minister, Winston Jordan would be seeking a supplementary estimate later this year.

The Foreign Affairs Minister explained that much depends on the kind of work , including research, that Guyana’s legal team might have to do. The case could take as little as two years or as much as six years before The Hague-based World Court delivers its decision.

In keeping with a decision by the United Nations Secretary General, Antonio Guterres to refer the Guyana-Venezuela border controversy to the ICJ, Guyana has filed its application for that UN judicial body to determine if the 1899 Arbitral Tribunal Award of the land boundary with Venezuela is full, final and perfect.

Greenidge said he was aware that the ICJ has since asked Venezuela to file a response to Guyana’s case.

The Foreign Minister said Venezuela could challenge the jurisdiction of the ICJ to hear the case, but even if the court rules that it has jurisdiction and Venezuela refuses to participate initially, it could join at any time during the hearings.