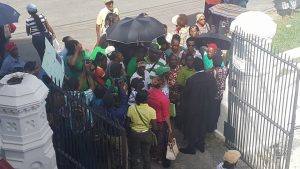 Attorney General, Basil Williams (in black and backing camera) speaking with pro-government supporters at the north-eastern gate of the High Court compound.

Chief Justice, Roxane George-Wiltshire Thursday urged lawyers for both sides in a case challenging the constitutionality of the appointment of the Chairman of the Guyana Elections Commission (GECOM) to stop expressing opinions in the media about the matter.

She asked the parties to cease “trying the case in the court of public opinion”.

Her call was issued before she set a timetable for Attorney General, Basil Williams and and his legal team as well as Attorney-at-Law for the People’s Progressive Party (PPP), Anil Nandlall and his team to file court papers before the next court date set for January 5, 2018.

“Persons are free to comment but they must not be contemptuous,” she said to a packed courtroom that included many supporters of the governing A Partnership for National Unity+Alliance For Change (APNU+AFC) coalition and the PPP. Justice George-Wiltshire asked the legal representatives “not to engage the public gathering in this case”.

The Chief Justice said “I don’t want to put a gag order” but made it known that she was disturbed by the headlines in many of the news reports, some of which has included opinions on the case that is now before the Constitutional Court of the High Court. 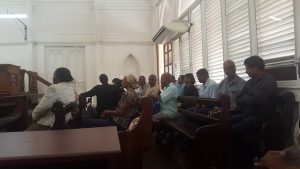 PPP and governing coalitiom supporters in the Chief Justice’s Court before her arrival and the calling of the case. More persons eventually filled the benches to capacity by the time the proceedings began.

She called on the lawyers from both sides to respect her comments and added that she has no issue with comments made on decisions.

When the legal teams reappear before the Chief Justice early next year, it would be for clarifications and elaboration of any points.

The main reason being cited by the PPP is that the President did not select any of the 18 names that had been submitted by Opposition Leader, Bharrat Jagdeo throughout almost one year before. The PPP also contends that Patterson is biased because he is a member of a pro-People’s National Congress Reform (PNCR) Facebook Page and he was part of an inner circle of top PNCR executives as pallbearers of the body of late party leader, Desmond Hoyte.

Solicitor General, Kim Kyte has since, on behalf of the Attorney General, filed court papers rejecting all of the PPP’s grounds.

Outside the High Court building on Charlotte Street, a small group of pro-government supporters gathered and at times made their views known quite loudly.

After the case was adjourned, Attorney General Williams, who is the Chairman of the People’s National Congress Reform (PNCR) went downstairs and told the gathering to leave.