“The purchase of the law reports using public funds for personal use is a flagrant misuse of public funds” ; Auditor General’s report was rejected – Attorney General Williams tells Court in libel case 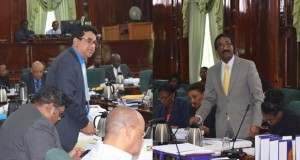 In denying in court papers that he had libelled Nandlall, the Attorney General relied on “fair comment” based on available information that he says shoes his predecessor had violated the Stores Regulations 1993 and the Financial Management and Accountability Act 2003 (FMAA).

“Further, the purchase of the law reports using public funds for personal use is a flagrant misuse of public funds. Property bought with public funds by the Ministry ought to remain the property of the Ministry,” said Williams in court papers seen by Demerara Waves Online News.

Williams said there was no evidence showing that the State’s payment of GYD$2.3 million for the Commonwealth Law Reports formed part of Nandlall’s conditions of service as has been claimed by him and then President, Donald Ramotar.

Nandlall has since been charged with larceny by bailee. He was not required to plea to the indictable charge and was released on self-bail pending trial. He has already signalled that he would be challenging the criminal case becausehe has a pending case in the Constiutional Court seeking to block the Special Organised Crime Unit of the Guyana Police Force from seizing the law reports because they are his private property.  He has said that he had asked government to take over his subscription to the reports because he was suffering a loss of income as Attorney General and Legal Affairs Minister

However, Williams has argued that the subscription and subsequent retention of the publications were to the disadvantage of lawyers at the Attorney General’s Chambers.

The current Attorney General and Minister of Legal Affairs said he was advised by then Permanent Secretary, Melissa Tucker in January 2016 that the Audit by the Auditor General’s Office into the law reports fiasco was flawed and that she would respond within the alloted 30 days.
The Attorney General and Legal Affairs Minister said the Ministry completely rejects the report presented by the Auditor General and his pronouncement on the matter of Law Books/Reports not being required to be subjected to the Stores Regulations; when public funds were used for the acquisition of same.

Williams said throughout the Report, the Head of the Budget Agency was not cited for any gross negligence or sanctions during the process although she was solely responsible and accountable for all procurement and disbursement of funds in accordance with the Fiscal Management and Accountability Act 2003, the Stores Regulations 1993 and the Procurement Act 2003.

“There was no mention of the Officer who approved all payments for the acquisition of these items (Law Books/Reports and computer parts and accessories) using public funds,” he said.

He noted that the Financial Management and Accountability Act 2003 (FMAA) states that “Public money” means all moneys belonging to the State received or collected by officials in their capacity or by any person authorised to receive or collect such moneys…” and that “a Minister or official shall not in any manner misuse, misapply, or improperly dispose of public moneys.”

Dealing specifically with Nandlall’s claim that he was libelled in several publications that had quoted Williams, the Attorney General recalled that it  was at a public meeting in Berbice on the 26th March, 2017 when the question was asked whether the Claimant was in possession of the law books and would be charged. The Defendant responded and said that the Claimant could be prosecuted for larceny of the assets. He argued that his comments were based on the position that the Claimant did not follow the Financial Expenditure Procurement process and the Stores Laws and Regulations and as a result could be subject to prosecution.

“The comments were not orchestrated to be an attack on the Claimant personally, but were made within the scope of the Defendant’s office and responsibilities as the Minister of the Ministry of Legal Affairs with responsibility to protect state assets. He was duty bound to undertake a reasonable investigation into the location of unaccounted assets.

The assets that are missing were bought and paid for with public funds and as a result, it would be in the public interest to inquire as to their whereabouts and subsequent return. The comments were not made maliciously but were based on facts on which the Defendant relies in his Defence,” he said.

The Attorney General and Legal Affairs Minister said he is responsible for the Anti-Money Laundering/Combating the Financing of Terrorism (AML/CFT) regime, the State Assets Recovery Act 2017 and the Special Organised Crime Unit (SOCU) which comes under AML/CFT and so he m ay have knowledge of financial crimes and efforts to recover state assets.

Alternatively, the words in paragraph 10 in their natural and ordinary meaning are true in substance and in fact.”

Williams said the origin of the eight separate claims filed by Nandlall originated from one subject matter, namely, the larceny of the Government’s Commonwealth Law Books for his personal use.

He said dividing one subject matter into eight separate claims is tantamount to abuse of judicial process.

He denied in totality the allegations and clakms and asked that the case be dismissed with costs.