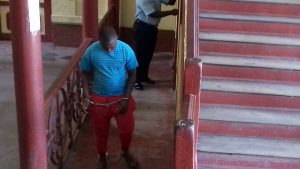 A mother on April 22 allegedly abandoned her children as police raided her house and allegedly found cocaine.

The charge read that on April 22 at 68 Cross Street , Werk-en-Rust Georgetown they had 117 grams of cocaine for three purpose of trafficking. 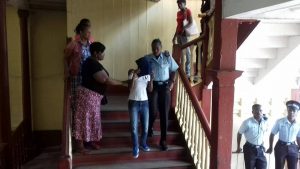 The duo was represented by Attorney-at-Law, Adrian Thompson who told the court that both defendants are medically unfit.

He noted that bail should be granted to his clients since Tomicka suffers from epilepsy while Delon recently underwent an open heart surgery. Both defendants, he noted, are currently taking medication for their illness.

Thompson added that a third person, who is the mother of the duo, was present in the house when police conducted their raid and she fled the scene.

On the other hand, Police Prosecutor Shawn Gonsalves objected to bail being granted based on the short facts which noted that the narcotic was found under a floor board in the house.

He further added that not enough special reason was presented for bail to be granted. Both defendants were remanded until May 8.

A search is ongoing for the mother, Odetta BobbSemple.