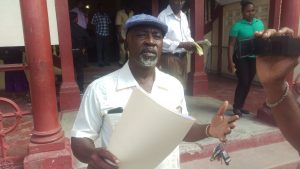 Due to insufficient evidence, city magistrate Fabayo A has thrown out the sexual assault charges against former Prisons Director, Welton Trotz.

Trotz told Demerara Waves Online after the ruling that he felt vindicated and maintained he is innocent. He said he is not sure what his next move will be but he believes the court was fair to him.

The entire matter was held in-camera, out of public view, owing to protection provisions under the Sexual Offenses Act.

Trotz was, in 2015, arraigned on a charge of sexual assault and granted GUY$100,000 bail. The former Assistant Police Commissioner pleaded not guilty then before city magistrate Fabayo Azore.

Trotz pleaded not guilty when he appeared before City Magistrate, Fabayo Azore. He was accused of committing the offence on a female prison officer.

He was relieved of his high-level security position by Public Security Minister Khemraj Ramjattan in October 2015, after the investigation was completed and the file sent to the Director of Public Prosecutions, Shalimar Ali Hack, who recommended charges be instituted.

Trotz is the recipient of a Disciplined Services Medal from President David Granger.