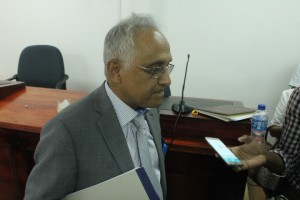 President of the Guyana Bar Association (GBA) Christopher Ram on Tuesday pulled the plug on the groups participation in the Camp Street Commission of Inquiry (CoI) after growing wary of the ‘unfair’ treatment being meted out to him by the Commission.

The GBA had applied and was granted full participatory rights at the Commission at its commencement several weeks ago.

Throughout the weeks, Ram had raised concerns about the limitation on the time being for the members of the GBA and other interested parties to cross examination witnesses brought before the CoI.

Essentially Ram’s concern was centered around the fact that the Attorneys representing the Guyana Prison Service, Guyana Police Force and Guyana Fire Service had unlimited time to cross examine but the same was not being afforded to the others.

As Ram rose to question Senior Prison Superintendent Gladwin Samuels on Wednesday afternoon, he raised the objection once more with the Chairman Justice James Patterson.

Patterson reminded Ram that they were not in a court of law and the time prescribed to cross examine is purely up to his discretion.

Not satisfied with the response, Ram flew into a fit of rage and said the Bar Association was no longer interested in being a part of the Inquiry.

Ram had also raised concerns about interruptions by other attorneys in the COI without any proper point of order.

It was pointed out by Prison Attorney Selwyn Pieters that Ram as the Bar Association President took the decision in a unilateral manner which should not have happened.

To this Ram responded “You give me a break,” as he walked out of the room.