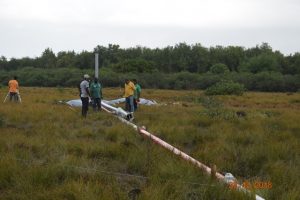 The Ministry of Public Infrastructure (MOPI) has begun installing four wind measurement stations along the Atlantic Coast at a cost of more than GYD$33.5 million (US$160,000) to determine the potential of this natural resource for the generation of sustainable renewable energy, the government’s Department of Public Information said.

The stations, which are being mounted on towers with a height of 200 feet each, are being installed along the coast at Onverwagt, West Coast Berbice in Region Five (Mahaica/Berbice), and at Port Mourant, Number 63 Village and Crabwood Creek in Region Six (East Berbice/Corentyne), respectively.

The project is being undertaken by the Hinterland Electricity Company Incorporated (HECI) which falls under the purview of the MOPI.

The Department of Information (DPI) spoke to Chief Executive Officer (CEO) of HECI, Horace Williams whilst he was conducting an inspection of the work being done on one of the towers on the foreshore at Onverwagt last week.

Williams disclosed that the objective of the installation is to determine whether wind speeds along the coast can provide sufficient power for the establishment of wind farms. This all forms part of the government’s thrust to achieving a transition to 100 percent renewable energy in the power sector over the coming years.

“Our department has done a lot of work with solar energy over the years. We want hydropower and of course we want wind power too in the sustainable energy programme mix,” Williams was quoted by the Department of Public Information as saying.

He added that “we have to do the assessment using these towers and then we can move on to see how wind can fit into the overall programme.”

Williams explained that once the towers become operational, sensitive electronic equipment on the towers will provide accurate information on the wind regime along the Atlantic Coast and provide very important long-term wind speed records. Data will be retrieved via a cell phone platform for a period of one year. This data will be analysed and then determinations will be made about wind energy potential and whether wind can become a viable part of the national energy mix.

Work on the installation of the first tower on the foreshore at Onverwagt commenced last week and was scheduled to be completed within the final days of 2018. Looking ahead, Williams said that annual mean wind speeds of seven metres per second would satisfy the requirements of wind turbines which can become operational on each of the four measurement testing locations. He added: “This will mean a lot for these coastal areas. But of course, we have to see what comes out of the assessment.”

The assessment period comes to an end on December 31, 2019. Installation of the towers at Port Mourant, Number 63 village and Crabwood Creek are to be completed early in the new year.

The project is being funded by the Global Environment Facility (GEF) and is being managed by the Inter-American Development Bank (IDB). The GEF was established on the eve of the 1992 Rio Earth Summit to help tackle the earth’s most pressing environmental problems including damaging retrieval techniques for fossil fuels as sources of energy. The GEF believes that renewable energy is a viable alternative and that the application of renewable energy technologies can reduce greenhouse gas emissions and pollution using energy sources such as wind, solar, hydroelectric, tidal, geothermal, and biomass.