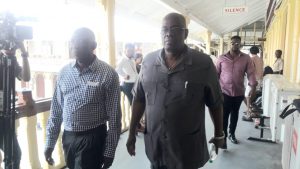 Four days after the People’s Progressive Party (PPP) and several small political parties succeeded in joining a High Court case by an A Partnership for National Unity+Alliance For Change (APNU+AFC) candidate for a judicial review of the Guyana Elections Commission (GECOM) to order a recount of the votes cast in general elections earlier this month, the PPP said the court does not have jurisdiction to hear that matter.

Attorneys-at-Law for the PPP’s Representative of the List, Bharrat Jagdeo asked Justice Franklyn Holder to find that the court cannot hear the judicial review case, after the Attorney-at-Law, Neil Boston—for the Chief Elections Officer, Keith Lowenfield—said the High Court could not order his client to produce the Statements of Poll in his possession.

Attorney-at-Law, Mayo Robertson, who is representing APNU+AFC candidate, Ulita Moore, told reporters that now that Trinidad and Tobago Senior Counsel Douglas Mendes asked the High Court to find that it does not have jurisdiction to hear the judicial review, the Court has to rule on that point before even deciding whether it can consider ordering Lowenfield to produce the Statements of Poll in his possession. “We firmly believe that the Court has jurisdiction. That is why we brought the action in the first place,” Robertson said, while declining to divulge the basis for his position to reporters before it is submitted to the Court.

The lawyers from both sides now have to submit written arguments on Wednesday and Thursday before they return to Court on Friday for further directions on the issue of jurisdiction.

Boston said he was not given an opportunity to respond to whether the Chief Elections Officer should produce the poll statements because “the jurisdiction issue has to be dealt with first.”

Attorney-at-Law, Anil Nandlall, who is also representing Jagdeo, said it was only after Moore’s lawyers raised the issue of whether the court has jurisdiction to order the Chief Elections Officer to produce the Statements of Poll that he and Mendes raised the issue of whether the court could properly hear Moore’s request for a judicial review. “You have a jurisdictional bar created in the Representation of the People Act against a court enquiring into decisions made by GECOM and Ulita Moore’s entire case rests upon questioning or asking the court to overrule decisions made by GECOM and to enquire into how those decisions were made and those things cannot be enquired into according to the Representation of the People Act so if the Court determines that it has no jurisdiction to deal with Ulita Moore’s matter, then the discovery application goes because the discovery application is connected to the Ulita Moore matter so the court decides to hear the question of jurisdiction in respect of Ulita Moore once and for all,” he said.

Section 140(1) of the Representation of the People Act states that “…no question whether as a function of the Elections Commission or any of its members has been performed validly or at all shall be enquired into in any court.”

Asked why he did not raise the issue of jurisdiction very early in the case, Nandlall said it was a lot of time and issues that were condensed and compressed within a short space of time. “These issues are arising as the case is progressing,” he added.

Previous: Britain warns of “serious consequences for those concerned” if election results are bogus
Next: 4 confirmed coronavirus cases in Guyana; 13 in mandatory quarantine