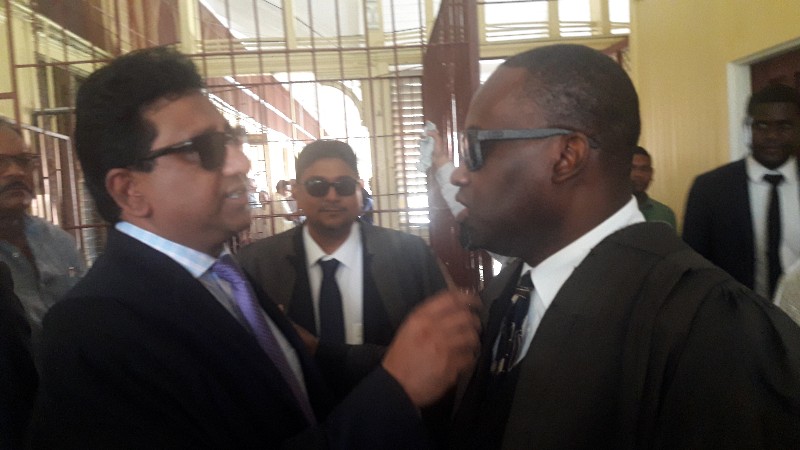 Lawyers for A Partnership for National Unity+Alliance For Change (APNU+AFC) are Saturday expected to argue in the High Court that the Guyana Elections Commission (GECOM) is not legally required to verify the statements of poll before results in each of the ten administrative regions are declared.

This contention is expected to be the subject of a major legal showdown between Attorney-at-Law, Roysdale Forde and People’s Progressive Party (PPP) lawyers and candidates, Anil Nandlall and Sanjeev Datadin.

Forde, who is an APNU+AFC candidate in the March 2, 2020 general elections, said the Representation of the People Act does not provide for a verification process. “What they are referring to as a verification process is an administrative arrangement or mechanism that has been put in place by the Elections Commission,” he said in a Facebook video.

But Section 89(1) of the Representation of the People Act, which deals with the procedure on conclusion of the count, among other things, provides for verification and public declaration of the final vote before delivering a return to the Chief Elections Officer. Each of the other nine regions had followed a verification process with representatives of the political parties. Section 84(1) deals strictly with counting of the votes leading to a declaration while Section 89(1) addresses the procedure after the counting ends.

Forde’s perspective comes as APNU+AFC seeks to have the People’s Progressive Party’s (PPP) High Court orders compelling the Returning Officer to verify the results for Region Four before making a declaration thrown out to pave the way for GECOM to declare all results and have President David Granger sworn in for a second straight term.

Forde stressed categorically that the “there is no law requiring that GECOM ensure that there is verification” for Region Four or any of the other nine regions. “There could be no breach of the law in relation to compliance with verification or failure to comply,” said Forde, tipped in some circles to be Guyana’s next Attorney General.

Attorney General, Basil Williams earlier this week told reporters outside GECOM’s Returning Office for Region Four that the results of an election could only be challenged by way of an election petition.

Forde believes that Region Four Returning Officer, Clairmont Mingo ended the verification process due to the abusive behaviour and misconduct by the PPP and the need to bring the process to an end as soon as possible.”I believe that one of the considerations that would have led to the termination of that verification process is the fact that we need to have some resolution brought to an end to this issue as fast as possible. Those are considerations that I believe that the Returning Officer may well take into his consideration especially in view of the fact, as I said before, that there is no strict legal requirement for verification,” Forde said.

The Attorney-at-Law said the declaration was done publicly and broadcast to the entire world.

The United States, Britain, Canada and the European Union as well as observers from the Caribbean Community, Carter Centre, Commonwealth, European Union, and the Organisation of American States have all called for the tabulation to be done in keeping with the law to ensure that the election results are transparent and credible. The western nations have together cautioned incumbent Granger against being sworn in without verification of the Region Four results as his government might be regarded as unconstitutional.

The GECOM-declared results show that of the 215,854 valid votes cast in Region Four, David Granger’s A Partnership for National Unity+Alliance For Change (APNU+AFC) won 136,335 votes and the People’s Progressive Party (PPP) won 77,258 votes. But the PPP says its Statements of Poll show that APNU won 114,345 votes and the PPP, 80,344 votes.

Previous: Granger to be sworn in if High Court throws out orders against GECOM -Harmon
Next: Protester shot dead while chopping policemen in Guyana post-election violence