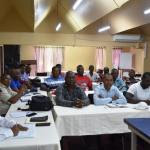 GAWU negotiators at the meeting with GuySuCo on Friday, February 7, 2020.

Thousands of sugar workers are set to get a wage and salary increase next month whether or not negotiations with the two trade unions are successful, a senior official of the Guyana Sugar Corporation (GuySuCo) disclosed.

GuySuCo’s Chief Industrial Relations Manager, Deodat Sukhu told News-Talk Radio Guyana 103.1 FM/Demerara Waves Online News that his negotiating team has already ruled out a retroactive increase for 2019 because the company could not afford such a payout.

Sukhu and and General Secretary of the Guyana Agricultural and General Workers Union (GAWU), Seepaul Narine declined to discuss the corporation’s offer. The GuySuCo official says he and his team are expected to meet again with GAWU next Wednesday. Similar talks are also expected to be held with the National Association of Agricultural, Commercial and Industrial Employees (NAACIE) on Monday.

Narine says the union is actively considering GuySuCo’s proposal for increases, and Sukhu said he got favourable signals from the workers’ representatives on Friday.

“While our union, at this time, will refrain from disclosing the details as the GAWU and the workers are actively considering the company’s offer, at the same time, it demonstrates that it is only through struggle that the workers and the oppressed will be able to surmount their obstacles and score, even meager gains from the administration,” GAWU said.

That sugar union suggested that the increase was linked to the impending March 2, 2020 general and regional council elections. “It did not escape our attention that the offer comes less than a month away from when the workers and their families are expected to exercise their franchise and when there are active attempts to woo their support after years of assault after assault perpetuated against them,” GAWU said.

The meeting was convened following a series of protests by sugar workers at the Ministry of the Presidency.

Following the restructuring of GuySuCo under the coalition administration, workers have been calling for wage increases which were not paid since 2015.

One obstacle blamed for the non-payment of wage increases stem from the saga between GuySuCo and the Special Privatisation Unit (SPU) of the National Industrial and Commercial Investments Limited (NICIL) in reconciling monies released to GuySuCo for the restructuring of the sector.

The Government secured a $30 billion loan to revive the sugar industry but not to pay wages and salaries.