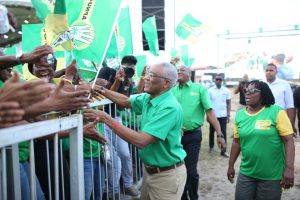 Presidential candidate for A Partnership for National Unity+Alliance For Change (APNU+AFC), David Granger Friday night announced that his coalition would introduce a system for sugar estate land distribution to ex-sugar workers and bring an end to squatting.

In what appears to be a gradual unveiling of campaign promises just about one month away from general and regional council election, Granger told thousands of party supporters at a rally at Leonora, West Coast Demerara, that a special mechanism would be put in place to address squatting. “On the 15th of March, I will set up a national squatter resettlement commission under the Ministry of Communities. We are going to make squatter settlements history. People mustn’t live like that in Guyana. People mustn’t live like that in Region Three.”

“We have to abolish squatting. No slums, no shanties, no squatting here in Region Three or anywhere in the country.”

Granger, who is the incumbent President said the “abscess” named “Plastic City”, a squatting area located at the mouth of the Demerara River, would be removed between 2020 and 2025 if the coalition wins the March 2, 2020, general elections.

In apparent reference to the opposition People’s Progressive Party’s presidential candidate, Dr. Irfaan Ali, a former housing and water minister, Granger remarked that “if I was a Minister of Housing and Water, I would be ashamed of myself to live in a region and have people living in those conditions,” he said at the rally.

With Guyana expected to produce at least 750,000 barrels of oil by 2025, the APNU+AFC presidential candidate promised to allocate Guyana’s “revenue” to “eliminate squatting all over Guyana.” He noted that 150 squatting settlements mushroomed across Guyana over the past 23 years.

“Oil money is not for a few rich people. Oil money is for you, the ordinary people in this country,” he said.

Touching on the “hard decision” to have closed several sugar estates because of unprofitability, Granger said the retrenched sugar workers would get former sugar estate lands (which) would be redistributed by a proposed State Land Resettlement Commission so that people who had been put out of work because they had been on the sugar plantation will be given access to land so that they can start all over again. We’re not leaving the sugar workers on their own” he said.

The APNU+AFC presidential candidate restated that some of the oil revenues would be disbursed to parents who send their children through a special public assistance education grant. “We are going to put oil money in your pockets,” he said.

Prior to Friday night, the APNU+AFC’s campaign yielded few specific and detailed promises.

The PPP has been promising to reopen the closed sugar estates, generate 50,000 jobs, revive mining, forestry and manufacturing and increase consumer spending by rolling back several taxes that were increased by the coalition since coming to power in 2015.

APNU+AFC has so far not launched a manifesto, but the PPP late last year unveiled a mini-package of election promises with a promise to launch a larger document this year.