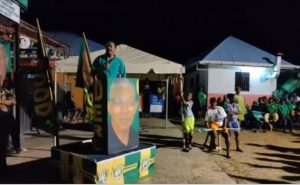 Attorney General, Basil Williams says if the incumbent A Partnership for National Unity+Alliance For Change (APNU+AFC) coalition regains power in March, government will pass legislation to fix the date on which general and regional elections must be held, but he concedes that removing the no-confidence provisions from Guyana’s constitution will still be a stumbling block.

Williams, speaking at a public meeting for the 2020 general elections, explained that President David Granger meant that he would prevent another no-confidence motion by passing fixed date elections legislation. “It ain’t going to happen again and the President said that it won’t happen again and they are saying a whole set of nonsense. All the President is saying, ‘we are going to do like America; we are going to have definite term limits’. You win an election, you have five years in office; nothing short, five years and they have done that in the UK (United Kingdom) also- passed legislation to have fixed terms. That’s all he meant,” said Williams, a former Chairman of the People’s National Congress Reform (PNCR).

But on Wednesday, he conceded that the no-confidence motion would also have to be erased. With removal of that provision requiring a two-thirds majority of the 65-seat National Assembly, Williams said that could be possible politically. “That’s why the no-confidence motion would have to be removed…everything depends on two-thirds support…What we are saying, in politics nothing is impossible,” he told News-Talk Radio Guyana 103.1 FM/Demerara Waves Online News.

The APNU+AFC ruling coalition is still reeling from the effects of the no-confidence motion that was passed 33-32 votes on December 21, 2018 after then government backbencher, Charrandass Persaud, had voted ‘yes’ with the main opposition People’s Progressive Party.

A long-running court battle eventually ended when the Caribbean Court of Justice ruled in June 2019 that the motion had been validly passed, but the Granger-led administration said it could not call elections until the Guyana Elections Commission was ready with a clean voters list and had sufficient funds.

Previous: APNU+AFC urges youths to prepare for thousands of construction jobs
Next: URP Leader, Vishnu Bandhu notifies GECOM on giving up US citizenship