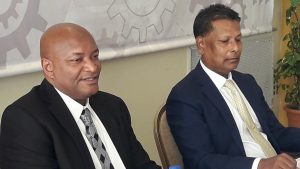 Change Guyana (CG) political party on Tuesday made a number of promises to ensure a “fair share ” of the country’s oil and gas resources are provided to ordinary Guyanese, while at the same time taking back all idle oil blocks and holding annual auctions with significant signing bonuses.

“All blocks for which investors’ commitments have not been delivered to date would be returned to state ownership. There is no speculation anymore on oil blocks,” CG presidential candidate, Robert Badal told a news conference at his Pegasus Hotel. He added that those blocks and unassigned blocks would be vested in a state-owned oil company, contracts would be awarded based on royalties and investors would have to pay local taxes like local companies.

Badal, a well-known hotelier and stockfeed manufacturer, said a CG administration would set up a national oil company in which Guyanese would be shareholders “from birth” “to give every Guyanese a stake in our oil resources and the benefits therefrom.” “Such shares would appreciate in value with every auction and every signing bonus. Sale of these shares may only be disposed to one’s family or the national oil company; no speculation in these shares,” said Badal, a chartered accountant.

In clear reference to the US$18 million signing bonus that government got from ExxonMobil at the time the first discovery was made, Badal said blocks would be auctioned annually to “realise the highest price with attractive signing bonus(es)”.

He said some of the oil revenues would be deposited in special funds to fight poverty and invest in key infrastructure, instead of parking a significant amount in a sovereign wealth fund (SWF). Badal said income taxes would be reduced to allow Guyanese to have more money in their pockets to spend, improved health care and the construction of a bridge across the Demerara River.

The CG presidential candidate said the SWF would not be established until 2022. “Our approach is that there are so much urgent things to do right now that we just can’t put it, as APNU is saying and the PPP is saying, in a sovereign wealth fund. We have to address those immediate needs of Guyanese currently,” he said.

If Badal gets his way, he would activate the SWF in 2023 by which time he expects more oil revenues would pour into the Guyanese economy and establish other specialised funds for agriculture, poverty alleviation, infrastructural development, health care and education. “These specialised funds will be the only funds that the minister can have access to and because these have already been appropriated by parliament so the specific funds are to ensure that these specific needs are addressed rather than the government vacillating and doing anything that they want to do,” he said.

The CG leader said a special welfare fund would be established to finance a safety net for depressed communities, single parents and the more vulnerable in Guyana. “Our focus is development around oil, not development by oil,” he said.